STAFF and pupils of Holy Family Secondary School in Newbridge enjoyed the highlight of their jubilee year last week when they welcomed Uachtaràin na hEireann Michael D Higgins and his wife Sabrina to help celebrate their Diamond anniversary as an academy.

Having already had celebrated masses for the past pupils and present cohort by Bishop Denis Nulty, and with a night of music planned for the Keadeen in October, the highlight of the 60th anniversary year came in a motorcade from Phoenix Park last Tuesday morning 10 September.

Arriving at 11am, the first family were greeted by school captain Mehetabel Ojienor and principal Sarah Allen, and were given a guard of honour by the school’s senior prefects for the tour of the school and its facilities. 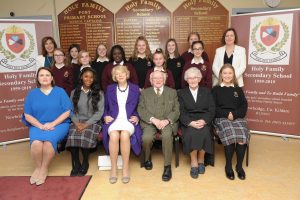 First up was the photos, initially with the 12 class prefects – two from each year – as well as with the vice-principals, and then with the board of management before a tour of the facilities.

There were more photos taken, before a brief talk from a first year prefect on the history of the school, before the Presidential salute in the gym and then speeches from Headmistress Allen and President Higgins.

“I see 714 pupils and very good facilities…and you wouldn’t get facilities like this if you didn’t have visionaries who saw education as important,” said President Higgins.

He opened his speech as usual as Gaelige, but added quickly: “I have to be careful with Irish, as I’m completely opposed to firing in a paragraph at the start and another at the finish”. And then he spoke in Spanish!

He brought this up after having been shown the language labs in the school and said: “Irish doesn’t stop you learning any other language on the planet, quite the contrary”.

After having shown off his trilingualism, he then pointed out that his predecessor Douglas Hyde was able to speak eight languages!

With the conclusion of the speeches Ms Allen invited the President to unveil a plaque to commemorate his visit, before the entire student body stood and sang the school song Soli Deo Gloria in the President’s honour.

This was an appropriate gesture as the final celebration of their diamond jubilee will be a gala concert in the Keadeen Hotel on October 9 featuring Luka Bloom, Highly Strung, Nicola Gainey, the Newbridge Chamber Choir and Musical Society, as well as the school’s own senior choir.

Tickets are just €20, and available from Holy Family reception.