Lumsden Cup finalists to be decided

THE road to Coill Dubh on 12 October for the final of the KDFL Lumsden Cup is winding down but there are two huge games on Sunday before we know who exactly will be competing for the most sought after trophy in Kildare soccer.

The meeting of two local rivals should ensure a bumper crowd in Allenwood on Sunday. 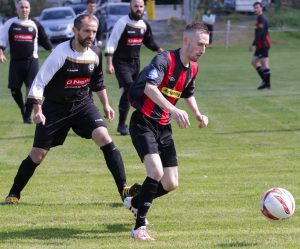 Monread’s Dean Fennessy shields the ball from Naas Utd’s Eoin Giblin during a league meeting between the teams earlier in the season
Photo: Luke Wynne

Monread have made a meteoric rise through the Kildare leagues since their formation in 2012, which culminated in their dominant Senior Division league title win last season, but one thing that has alluded them is the Lumsden Cup.

They are not short on experience though and the likes of Conor Coady, Dean Fennessy and Mick Ahern were all part of the Naas Utd side that beat Liffey Celtic in the 2015 final.

Defensively, Monread are strong and the central defensive pairing of Keane Cully and Alex Dunne means they don’t away anything too easily. They have plenty of goals in the team too and as well as Fennessy and Coady, Olly Dunne is always a goalscoring threat.

Monread, now managed by Brian Woulfe, have made it quite comfortably to this stage of the competition. They saw off Maynooth 5-2 in Round 2, although they waited until falling two goals down before showing their quality.

Then they faced fellow Senior Division side Kildare Town in the next round and recorded a routine 4-1 win and then made short work of Division 2 Old Fort Celtic in the quarter-finals with a 9-0 win. In the league, they defended their title with honour and were still in the running to reclaim their title until the pace set by Suncroft and Clonmullion proved just too hot to handle in the last weeks.

Naas Utd haven’t pulled many trees with their league form but they have shown their quality in the cup and have had a more difficult route to the last four than their opponents. They were pushed all the way by Division 2 side Allenwood Celtic in Round 2 before a 2-1 win. They were paired another Naas side in Round 3, Redwood of the Premier Division, and found themselves in big trouble when 2-0 down after just 20 minutes. However, a goal from former League of Ireland star Baba Issaka kickstarted the comeback and a goal seven minutes from the end by Paddy Diamond completed a 3-2 win.

Issaka was on the scoresheet again in the quarter-finals when Naas travelled to Castle Villa but a late goal from the home side forced the game into extra time. From there, Stephen Brady proved to be the Naas hero when his powerful header sealed a 2-1 win.

Now managed by club stalwart Stephen Burke, who played in Naas’ 2011 final loss to Coill Dubh and was a late substitute during their 2015 final win, Naas are backboned by the experience of the ageless Eoin Giblin and Wayne Doyle, and Issaka has been a huge addition too.

Monread won both league fixtures between the teams this season but with a Lumsden Cup final place now at stake this should prove to be a cracking encounter and you couldn’t rule out the possibility of this game needing extra time, and even penalties, to decide a winner.

On form and league positions this semi-final should be a more straight forward affair but you can never rule out the possibility of an underdog causing a shock in the Lumsden Cup.

Clonmullion had the disappointment of narrowly missing out on the Senior Division league title to Suncroft last week but they should be immensely proud of their efforts during their first season back in Kildare’s top flight.

They have been one of the form sides in the league over the last couple of seasons and after going unbeaten in the league last year on the way to the Premier Division title, they lost just a single game in the league this season.

Although, ultimately, a couple of draws in games that they probably should have won cost them the league title they have shown tremendous form in the Lumsden Cup this season. Simply put, they needed to because they were given some difficult games through the competition so far.

First up, they hosted a Suncroft side in the hunt for an unprecedented third Lumsden Cup in a row but claimed a very hard fought 4-2. After beating the winners of the last two years, Clonmullion were next drawn against last year’s beaten finalists, Ballycane Celtic.

This was another game that could have gone either way but Clonmullion once again showed the winning mentality that has become engraved within the team in the last few seasons in a 3-2 win.

Once again their reward for winning was test against a Senior Division side in the quarter-final, away to Rathangan. After taking an early lead through a Cody Mulhall penalty, Clonmullion found themselves 2-1 down early in the second half but goals from Steven Donovan and Corey Moore secured their passage into the last four.

Mulhall is sure to be one of their key players on the day. He was a hugely talented youngster when representing Ireland at underage level but was desperately unlucky with a series of injuries that also disrupted a spell with Scottish side Hibernian. Back with his local side, Mulhall seems to be enjoying his football again and Clonmullion are reaping the benefits. 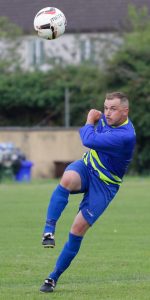 If Arlington manage to find a way through a midfield containing the likes of Timmy Doyle – who is one of the iconic figures in the recent past of the Lumsden Cup after he went in goal for Castle Villa in the 2016 final following the sending off of goalkeeper Alan Proctor and ended up man of the match – and Ricky Moriarty, and then through the strong central defensive pair of Shane Foley and David Neill they still need to find a way past arguably the best goalkeeper in the Kildare league, Mick Lawless. Even allowing for the impact that Mulhall has had on the team further out the field you could easily argue that the ever dependable Lawless has been the most important signing in the recent past for Clonmullion.

Even taking all that into consideration, Clonmullion would be well advised to take the threat of Arlington very seriously. Although playing two divisions lower, they have shown excellent league form this season and they will be expected to win their game in hand to set up a winners take all game against Coill Dubh for the Division 1 title.

They have snuck under the radar on their way to the last four but have had to come through a couple of difficult away games. After a couple of byes in the early rounds, they beat Naas AFC 5-2 in Round 3 and then needed extra time before seeing off Straffan by 3-2 in the last eight.

If everything goes to form then Clonmullion should be untroubled on their way to a final but you can never be quite sure in the Lumsden Cup and they will have to be fully focused to ensure that they aren’t the latest victim of a giantkilling upset.