THE largest-ever gathering of men’s shed members in Kildare and Laois – judging by the size of the crowd – took place last Wednesday (11 September) at Monasterevin Community Centre.

Shed meembers from across the two counties descended on the centre for a showcase event filled with networking, music, information, showcasing samples of their work and more – a chance to forge links and see what other sheds are up to.

“They were all showcasing what they do in each of their sheds and they were networking and it just gives them a boost,” said Eva Beirne, National Volunteer Coordinator with the Irish Men’s Sheds Association (IMSA). At one stage, she noted, there were 120 men counted in the room. “We’re very, very happy.”

Members of the Mountmellick Men’s Shed choir took to the stage on the day (a rousing rendition of Ring of Fire went down particularly well), while a performance from the Naas Community Men’s Shed folk group also went down very well with the audience. 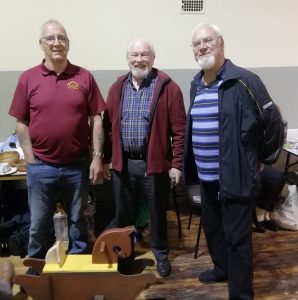 Down on the floor, Naas shed member Brian Stewart was showcasing an intricate model of a building site, complete with workmen, a crane, excavators and more – some of the items, he said, were 3D printed. He told the  Kildare Nationalist that he’s been a member for three years now and is the group’s youngest member. “I specifically do model making,” he said, adding that he’s working with a crane company and enjoys being part of the shed. “It’s enjoyable, gets me out of the house.”

Alongside men’s sheds from Clane, Kilcock and Kildare town, the local Monasterevin Men’s Shed also took part. Their eye-catching stand included items made by Richard Berry who said he tends to focus on woodworking. Richard is originally from South Africa but has been living in Ireland for 19 years and in Monasterevin for five years, and is a member of the shed for going on three years. He explained they have a lathe that he turns some items on – he does use power tools but finds there’s more satisfaction in hand tool woodworking.

“I live in an upstairs apartment so I can’t have a workshop at home, not one that I can do this sort of work [in],” he said. “So it gives me that outlet, a creative outlet. But also, I’ve made good friends through meeting with the men.”

Tony Jones from the men’s shed in Kilcock, whose table featured a range of beautiful pieces such as wooden pens, bowls and candle holders (including one made from 26 pieces of wood), explained that the group features like-minded people and they do things together.

Tony, a member for three years who said he’s “obsessed” with woodturning and makes something every single day, remarked that it’s nice to see other sheds doing things and added that Kilcock is a great community. People will come in with something wooden that’s broken, like a bench, a chair or a drawer and ask them to fix it, or perhaps to make an item like a bird table. “They ask us things all the time and if we can do it, we’ll do it, because they do more for us than we do for them,” he said.

As an onlooker, the sense of community and camaraderie was almost palpable on the day – Eoin Martyn, Chair of the IMSA, referenced the buzz in the room and described the turnout as outstanding and unbelievable – “from three years ago having about ten or fifteen men in a room to having over 120/130 here today”.

Showcase events like this are held annually around Ireland and the one in Monasterevin was their 17th this year. Membership is growing organically and Eoin said that they’re hoping that more younger people come in. “What we would be looking for is more younger men to start coming into the sheds,” he noted. “That’s something that we will have to have a look at going forward.”