From Madrid to Robertstown

YOU know it’s not going to the usual Junior Football Final preview when talk veers towards covering Atletico and Real Madrid matches for work but then again, Robbie Dunne isn’t living much of a usual life at the moment. 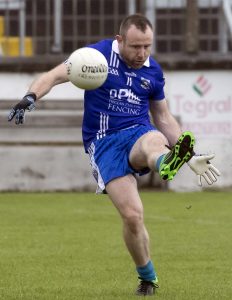 While for most of his team- mates Sunday’s final in St Conleths Park means a short trip  through Kilmeague and over the Hill of Allen, Dunne will be making his way from Madrid.

It’s a journey that he is well used to now, particularly this season after being roped into helping the Robertstown cause by their manager, and his brother, Aidan.

Meeting a Spanish girl further piqued his interest in Spain and cemented his desire to go live there.

“I met Andrea and we always had it in our minds to move to Spain. She is very proud of her country and always spoke highly of Madrid. She said that there was loads of work there teaching so I figured I’d give that a go,” said Dunne.

The only problem was that after studying journalism in Ballyfermot and having a love of football settling into a life of teaching didn’t seem all that appealing.

“It really scared me, I knew that if I went to Spain and started teaching and maybe moved into communications or PR that I’d lose the flavour for writing and journalism and football – but I wanted to stay close to that,” he said.

Shortly after moving to Spain, two things happened that directed Dunne back on the journalism path and towards covering some of the biggest soccer clubs on the planet.

First up, he landed on his feet with a job.

“I got in touch with a guy who has since become a friend and within three weeks of being over there I had a job with Diario AS. Things just took off from there,” he said.

Perhaps, even more importantly, he decided to write a book – ‘Working Class Heroes: The Story of Rayo Vallecano, Madrid’s Forgotten Team’ – detailing the travails of Rayo Vallecano. It proved to be a huge success.

“I’m quite an impulsive person and I just decided to write that book. I knew a guy in the north of Spain who was in a very similar position to me in terms of writing a book about a club and wanting to build a career for himself. I invested a lot in it with the travel but I just thought that even if nothing came of it that I’d have a book to my name, I’d have loads of travel done, seen a load of games, met lots of people and it would always be an interesting story to tell. I was afraid of coming here and getting into teaching and losing my love of football and writing and telling stories. I wanted to stay close to that,” he said.

Writing the book opened many doors for him and it was extremely well received.

“Rayo have a really interesting story. It would take a lot of effort to make it not interesting, it’s just such a fascinating club. Even if you are not a fan of Spanish football, you’ve probably kind of heard of Rayo, they’ve gotten hidings off Real Madrid and Barcelona, they had a bit of a despot owner for a long time, their fans are very active and I think people connect with that. It was a story crying out to be told and I was just lucky enough to get in there and I was happy enough with the reaction it got,” he said.

Nowadays, he spends most of time covering Atletico Madrid games but has also worked at Real Madrid’s home ground of the Bernabeu.

“I’d go to a lot of Atletico games for an American website that I work for too. I filled in for Dermot Corrigan for a while, another Kildare guy who covers Spanish football, and gone to a lot of Real Madrid games. I have a Rayo season ticket and I’d go to a lot of other games then as a fan as well,” said Dunne.

So with all that excitement, how did somebody who had played all his GAA with Clane but played his last game in 2016 end up with Robertstown?

“Aidan took the job at the start of the year and asked if I could help out in any way. When your brother asks for help of course you say yes – and then wonder what you have got yourself in for. He knew that I was playing a lot of football in Spain so he knew that I was keeping fit. Aidan has a little girl too and I’m the godfather so I’d come home quite regularly to see her anyway, every six weeks or so. Every time I was coming home I arranged it so I’d get a couple of training sessions and a league game in.

“On one occasion I was going to a wedding in Canada, I came home before that and got a game in and was back in Ireland before going back to Madrid and got another game in. So I’ve played quite a bit and I’ve kept up with everything that has been going on,” said Dunne.

Even as an experienced player, who was on the fringes of the Kildare set up during Kieran McGeeney’s time, it can be a daunting experience as a stranger going into a new dressing room but Dunne praises the Robertstown lads for helping him settle in so quickly.

“Having played with Clane for so long, you just know the one thing so it has been really interesting to be in a different dressing room and see the different dynamics there. It’s a nice blend there, Joe Kavanagh, Mark Kelly, Damien Leeson, they were there in 2011 and have won it out before, then there are the young lads like Danny Scully, Cole Lyons, Peter Hogarty, Jason Butler. I wasn’t sure how they’d be with me when I just arrived in but they have been really great with me, Aidan always spoke very highly of them and I can agree with him now,” said Dunne.

Despite the fairytale nature of this story, Dunne acknowledges that Robertstown are big underdogs on Sunday and knows that most will be expecting a Ballymore win.

“They say the form book goes out the window for finals but in reality you look at what Ballymore did to Rathcoffey in the semi-final and over the whole year, and they were probably unlucky to be relegated last year. It’s Aidan’s first year in charge and he’s probably exceeded his brief by beating Caragh and getting to a final but at the same time we’ll go out and give it a crack and see what we can do,” said Dunne.

As fate would have it, the Junior Football Final isn’t the only big game this weekend and the two Madrid footballing rivals, Atletico and Real, meet on Saturday evening. That could complicate Dunne’s journey home and may mean an early Sunday morning dash from Dublin airport but it will be a journey worth making if Robertstown can upset the odds.