A variety of events featuring something for everyone were held over three days, beginning on Friday 27 September with a rocket-making workshop (each workshop had an ISL interpreter) in Athy library with Una Halpin from Wildways Adventures.

The library was also the focal point for events on Saturday. Gerry Daly, illustrator of the picture book  Where Are You, Puffling? A Skellig Adventure , was on-hand that morning, followed by mathematical fun with Maggie Owens (co-ordinator of Athy Sing and Sign with Aiden McHugh), and crafts with Bee Costello – participants made their own little hand shape of the sign ‘I love you’.

The final day of the festival was Sunday, which kicked off with an ISL yoga session with Laura O’Grady, a child of a deaf adult. Up next was a “fantastic” ISL tour of the Shackleton Museum with Seamus Taaffe, followed by a screening in Anderson’s of a short film by local man Michael Aldridge – Signed Life – created for Culture Night. “The message really from the film was learning ISL is not just a hobby, it’s a language, an everyday language. And everybody should learn it,” said Maggie. 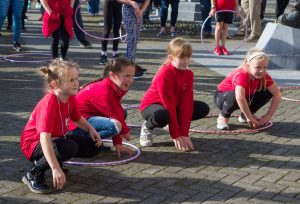 Members of Athy Sing and Sign Group following the dancing moves of Laura OGrady (CODA) at the ISL mini festival inAthy last weekend
Watch out for lots more photos from this event next issue
Photo:Luke Wynne

One of the highlights of the weekend was undoubtedly the fun-filled dance-off in the back square on Sunday afternoon. Maggie explained that with committee members Linda Dobbyn, Majella Harris, Breda Moore Flynn and Mary Byrne (who she described as “fantastic” in helping to organise the weekend) they decorated the back square with ribbons and hula hoops. “It was fabulous,” she said.

DJ Danny “really got the back square rocking” with everything from Vengaboys to Dancing Queen. Athy Sing and Sign members signed the song Old Town Road and volunteers from the Centre of Deaf Studies came down from Dublin and signed songs for the crowd from the podium.

The club also produced a colourful illustrated booklet of basic ISL, designed by the “brilliant” local artist Brendan O’Rourke with a message by this year’s club chairperson Leo Harris, a member of Athy Sing and Sign for the last five years. Alongside the club’s highlights of 2019, the booklet featured illustrations of the signs for subjects like the months of the year and times of the day.

Space was another topic for this year’s booklet, with the 50th anniversary of the 1969 moon landings commemorated in 2019 (hence the rocket-making workshop). Maggie explained that they shared the space poster on Twitter and were contacted by Blackrock Castle Observatory who loved it and asked if they could use it for an upcoming initiative.

The festival was made possible through funding from Kildare Co Council and a Creative Ireland bursary – Maggie noted their thanks to Arts Officer Lucina Russell. She also highlighted their gratitude to the Athy Lions Club for providing funding which means that some of their students will undertake a QQI Level 3 in Irish Sign Language.

“There was smiles all around… everybody enjoyed it!” she said of the recent festivities. “It was just a brilliant weekend for everybody.”