FIGHTING for a sustainable income for all farm families in Ireland is one of the driving forces behind Brian Rushe’s campaign to become the next deputy president of the Irish Farmers’ Association (IFA).

The Kildare farmer officially launched his campaign in Newbridge last week, having been nominated by the local Carbury-Cadamstown IFA branch. His campaign pledges are fairness for farmers along the supply chain, recognition that farmers do more than anyone else to drive positive environmental change, mobilising and energising an agile IFA in the face of challenges including Brexit, CAP reform, market volatility and increasing bureaucracy, and holding those who work for farmers to account.

“I am ready to work hard to deliver a bright and sustainable future for our farmers and their families,” he remarked.

The 38-year-old, IFA’s Kildare/West Wicklow chair since 2017, farms in Carbury with his wife Rebecca and their two sons John and Rhys. He was a beef and tillage farmer for years but began milking in 2013 and completely exited the former in 2015, “a decision we made in the family for our futures”.

“It’s been good to us and I’m happy we made the move,” he explained, adding that the price is “softening” now and noting that anyone who gets into this line of work has to invest a lot, “especially coming from scratch”. 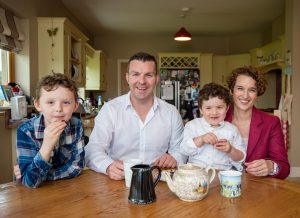 Farming is in the blood, from both sides of his family, and Brian explained that after doing business studies in Dublin he came home and has been farming in his own right since the age of 21. The dream, he said, is that he ends up farming with one or both of his sons, though the economic sustainability of farming is something that he’s always worried about – highlighting downward pressures on prices and upward pressures on the cost of inputs. “We’re the pinch point all the time in the supply chain,” he said.

Farmers, he has said, so often feel like they’re under more and more pressure, worrying about whether they have enough money to provide for their families, pay the banks and, in many cases, put food on the table. He described farmers as “the drivers of everything positive in our industry” yet it’s farmers that “often benefit the least”.

The Kildare man has pledged to work with all sectors of the industry to deliver a positive future for all, saying that “farmers all pulling together are an unstoppable force and I want to help us to do that”.

“I want to get out there and I want to fight hard for incomes, for farm incomes… I’m banking my future on farming and I’m banking my children’s future on farming, and hopefully they’ll follow me into it,” he told the Kildare Nationalist. “I’m getting involved now and I’m putting myself forward because I want to make sure there’s an industry for them to get involved in when it comes to their time… and all other farm families as well.

“You hear a lot of talk about environmental sustainability, he added, “but the real worry farmers are facing is their economic sustainability.”

The issue of farm incomes and price was brought to the fore in a very public way through the recent protests and blockades by beef farmers across the country – seeking, among other demands, a fair price for their product. Brian explained that people he spoke to told him they couldn’t encourage their children into that. “The industry needs to be sustainable for the next generation as well,” he noted, describing the beef protests as “a manifestation of all that frustration, all that despair in some cases” regarding that sector.

Brian explained that he’s hoping to build on the work of the outgoing deputy president Richard Kennedy and president Joe Healy, adding that the association needs to remain dynamic and ambitious in what it wants for farmers.

He highlighted the benefits of his role as the Kildare/West Wicklow chair, noting that he deals with all types of farmers – across that area are dairy, tillage, beef, sheep, hill and suckler farmers. His position involves hearing about and dealing with their issues, alongside dealing with the council on planning and other issues or the Department of Agriculture on TB. “It gives you a great grounding in all the issues,” he said.

The elections will take place later this year and nominations close tomorrow (Wednesday 2 October). Brian explained that at the minute he finds himself in a strange position where the only other person who was in the race for the role of deputy president has dropped out. Still, he’s not expecting it to be straightforward.