Kildare writer pops the question in the most romantic location

WHEN THE boss asked me to have a word with a local couple who just got engaged at the Taj Mahal I assumed the question was popped over candles and a lamb Bhuna on the main street.

Well, there’s me in the ha’penny place for the foreseeable for thinking that was the limit of the imagination of local prize-winning author and playwright  Martin Malone and what he had planned for his beloved Valerie.

He whisked, as I believe is the technical term for these sort of surprises, Ms Moorehead all the way to Agra in the state of Uttar Pradesh in India to ask her the biggest question on the Diana Chair at the ACTUAL Taj Mahal – the greatest monument to love in the world.

“I’m still reeling from it at the moment, absolutely!” said Valerie this week, after returning.

“It was very magical, a huge surprise,” said the still thrilled Newbridge woman. 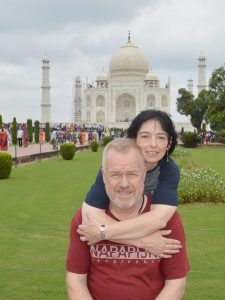 When asked how he managed to get away with keeping such a moment a surprise she responded. “Martin won a grant to go there [India] to research a book. His great-grandfather and my grandfather both served in India, my grandfather was in the Mutiny in 1922,” said Valerie.

“He said he’d bring me on a holiday. I had no idea what was on his mind! But he had a guide and a photographer organised, so he got us in quicker,” she added.

“It was unexpected and so romantic, something I’ll never forget,” she said wistfully.

“Romance doesn’t go out the door when you get older, but I would never had thought it for me!” admitted Valerie.

The couple first met 13 years ago in the much less romantic setting of the Whitewater car park where Martin was the manager at the time.

“Circumstances got in the way, they always had, then the spark returned a year -and-a-half ago, and we got together fulltime,” she explained.

Though the couple haven’t set a date, they’re hoping to celebrate a Celtic wedding “somewhere in the Wet” around the end of the summer next year.

King of Reality TV trips the light fantastic on DWTS