Walk in the wood remembers loved ones lost to suicide

PEACEFUL Oughaval Woods in Stradbally was the setting recently for a poignant yet uplifting memorial walk for loved ones lost to suicide.

Despite torrential rain, determined families and friends gathered for the third annual Giving Light and Hope Walk in aid of suicide charity Teac Tom, which has branches in Stradbally and Kilkenny.

With many wearing orange as a symbol of remembrance and hope, the group walked in solidarity with individuals and families affected by suicide. Following the event, they gathered in a remembrance space to honour their loved ones with beautiful music and song. 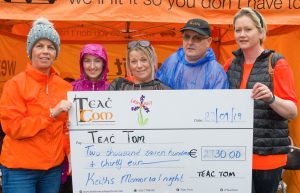 Teac Tom founder Angela Hayes and Stradbally branch founder Caroline Devoy led the event on Sunday 22 September. They were overwhelmed by the generosity of all supporters, with donations that included a €2,730 cheque from the ‘Keith’s Memorial Night’ organisers.

The Stradbally branch of Teac Tom was set up in 2017 by Caroline and her family, who lost beloved sister and daughter Clare O’Brien to suicide in June 2015. The voluntary organisation offers free counselling and therapy to adults, children and groups affected by suicide, as well as family and one-to-one support.

The Thomas Hayes Trust (THT) that led to Teac Tom was established in February 2014 by Angela, her children, family and friends following the tragic loss of her son Thomas to suicide in 2010, on the anniversary of his dad’s suicide. Over the past five years, it has become an extremely important support service for people devastated by the suicide of a friend or family member. The contact telephone number for both branches is 056 7796592 or 087 6566377.

King of Reality TV trips the light fantastic on DWTS