Kathryn sheds a tear as she launches spa in Kilkea Castle

TV PRESENTER Kathryn Thomas was back in Kilkea Castle last week for the official opening of the luxurious new spa at the 12th century castle hotel resort.

Kathryn admitted that she had been overcome with emotion driving up the avenue and had enjoyed a quiet little cry in the walled garden prior to carrying out the official launch of the spa as she recalled her wedding there just six weeks previously. 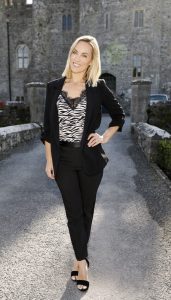 Kathryn Thomas at the launch of The Spa at Kilkea Castle.
photo Kieran Harnett

The spa offers both day and overnight packages with a range of treatments on offer, using products from Elemis, in the spa suite which includes treatment rooms, a fantastic hydrotherapy pool and luxurious relaxation room.

The next phase in the development of the Kilkea Castle resort will be the launch of their new conference facilities which are nearing completion.

Located just an hour’s drive from Dublin, Kilkea Castle is one of the oldest inhabited castles in Ireland, boasting a rich history. The charming 12th   century estate, surrounded by 180 acres of lush woodland, is the perfect base to explore Ireland’s Ancient East. www.kilkeacastle.ie