Ringing the anvil’s song of generations

ONE of the presentations in Kilcullen during the recent Heritage Week rang a sound that echoed through generations in the nearby market square.

It was local man Pat Kelly’s recollections of his family’s trade as blacksmiths, working from the original family home in the square. His demonstration hammering of a horseshoe on an old anvil exhibit in the Heritage Centre would have been a daily background to Kilcullen life in his grandfather’s time.

“My grandfather and his four brothers were all blacksmiths,” Pat says. “The family home in the square in Kilcullen was where my grandfather operated, and my father Joe grew up with the trade before he joined the army. He served on The Curragh and on Spike Island, but after a while my grandfather wrote to the Commanding Officer saying that he needed him home because the forge was so busy.”

So Joe came home, and later was given a discharge from the army. He afterwards served his time properly as a blacksmith with Paddy Myers of Mile Mill. Subsequently, after marrying in 1947, he bought the property, home and business from his former employer. 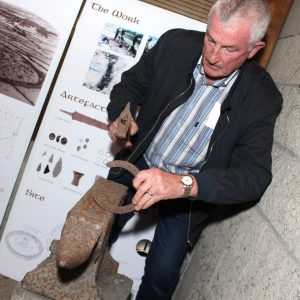 Though he now had his own business as Kelly’s Forge in Mill Mill, Joe also worked on The Curragh full time with the Office of Public Works, where he was responsible for maintaining gates, railings and other ironwork around the army base. He also had to maintain ironwork in Coolmoney Camp in Co Wicklow, and at the shooting ranges. “All the targets were made of steel and he’d have to go and repair those.”

The business in Mile Mill was primarily agriculture based, making new teeth for ‘grubbers’, and pins for the pin harrows. He also made new teeth for the buckets used by his land drainage friend Dan Breslin from Brannockstown.

Local studs like Newberry and New Abbey also employed Joe Kelly to shoe their horses and foals. Through all this contact with thoroughbreds, Joe gained a reputation as an expert in how to present young horses. “He’d be able to judge what way their feet were turning in or out. Then he’d pare the feet in a way that as they walked they’d look well in the sales ring, at Goffs or wherever.”

Pat’s father was a member of the Kilcullen Parish Choir during its heyday, winning many medals and trophies. “He was with the choir for well over 60 years, along with people like Bill Malone, Paddy Kelly and Tommy Dowling. They used to rehearse in one of our bedrooms, especially coming up to times like Easter and Christmas. And sometimes in the forge itself, along with cases of bottles of Guinness.”

The choir regularly featured on the famous ‘Radio Train’ to Knock Shrine, and Joe Kelly was also in the choir in the Phoenix Park when Pope John Paul came to Ireland in 1979. It was inevitable that some of the family have carried on the music. Pat and his brother John are both regular musicians at community events and other occasions.

Growing up in the forge also stood to Joe’s sons in their own careers. “I became a fitter, later with the posh title of maintenance technician. Joe became a mechanic, Ned was an awarding winning blacksmith and master farrier, and John is a blacksmith. When I went to be an apprentice fitter after my 16th birthday, I was way ahead of the other lads, because I had grown up with it.”

So in the ring of that hammer strike on the Heritage Centre anvil, there was a symphony of master craftsmen’s lives.