FORMER Ireland manager Brian Kerr was the guest of honour as Castle Villa celebrated their 50th anniversary with a gala event in the Dolmen Hotel in Carlow last Saturday.

People who had played for, supported, or helped out the club in any way over the last 50 years arrived from all over Ireland and from as far flung places as Southampton, Orlando and California to be there on the night. 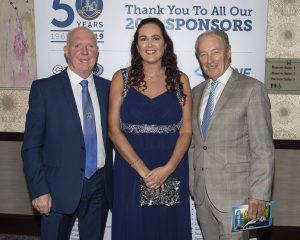 It was a night to reminisce about a club that was formed in 1969. From humble beginnings they went on to mix it with the very best clubs from Dublin and all around Leinster before joining the Kildare and District League as a founder member in 1994 and becoming one of their most successful clubs.

Walter Brooks is generally accepted as being the man who helped kickstart the club. The World Cup in England in 1966 helped build a passion for soccer in the area and in the edition of the Nationalist dated 11 September 1970, a report said ‘soccer enthusiasm in Castldermot is rapidly rising. The parish now has three clubs: Castle Villa, Kilkea and Levitstown. Castledermot club Castle Villa already has 60 members and is rapidly growing. The club secured a pitch at Woodlands from Mr. Michael Dempsey and work is in progress at the grounds erecting dressing rooms, goalposts and marking out the pitch’.

John Savage is another recognised as a key man in getting the club up and running.

Through the 70s the club travelled all over Leinster and the sight of buses packed full of supporters leaving the village and off another trip to cheer on the team were a regular sight on a Sunday.

One of the club’s first major successes came in the Counties Cup in 1979. Two matches, both with extra time, failed to separate Villa and holders Tullamore but it was third time lucky for Villa when goals from Bill Hickey, Ger Hickey, Bobby Byrne and Dick Caplice gave them a 4-0 win in the second replay.

For any club who have lasted as long as 50 years it is hard to pick out their greatest player but Bill ‘Blocker’ Hickey is generally accepted as Villa’s best ever and he was rewarded for his talents with a Junior international cap in May 1980 when Ireland took on Northern Ireland in Portadown. Although this was the sole cap won by a Villa player many within the club still argue that Martin Farrell deserved to be similarly recognised for his displays through the 80s and into the 90s.

Just a week before Hickey’s international recognition, ‘Blocker’ set up the winning goal for Seamie Whelan in a 1-0 win over Clara in the Whiteley Cup final. That kickstarted a glorious decade for the club and they won five Whiteley Cups in total. They retained the cup in 1981 when they hammered Stradbally 4-1 in a final played in Athy. Hickey was again to the fore with two goals, Whelan and Dermot Haughney were also on the scoresheet.

Villa reached the Sheeran cup final for the first time in 1982 but were beaten 2-1 by Killavilla – but better days in that competition were just around the corner.

The 1983/84 season is rightly remembered as one of the best in the club’s history after they won a treble. In a matter of just a few weeks they won the Premier Section of the Midlands Counties League, the Whiteley Cup and the Sheeran Cup.

The Whiteley Cup was the first into the trophy cabinet after a 3-0 win over Birr Town in Portarlington. All three goals came from Pat Dolphin corners with Seamie Whelan, Mick Gorman and Martin Farrell taking turns to head past Sean Ryan, a brother of long time Villa goalkeeper Patsy.

The following week, the Villa supporters travelled to Dalymount Park to see their team take on crack Dublin side Drimnagh Dynamos in the final of the Sheeran Cup. Drimnagh, who had won the Dublin section of the Leinster Junior League, took the lead but Martin Farrell equalised when he headed home another Dolphin corner. Dolphin then went from provider to goalscorer in the second half when he netted the winner following a wonderful pass by Declan Hennessy.

Villa could have completed the treble the following Thursday evening with a win over Killavilla. It seemed that their league and treble dreams were slipping away when they were 2-0 down inside the last 10 minutes. However, an 83rd minute header from Martin Farrell from yet another Dolphin corner sparked a comeback and four minutes later Paddy Farrell equalised after a Dick Caplice pass to earn a hard fought 2-2 draw and set up a play off against Tullamore to decide the league.

The drama continued the following week when Villa clinched the treble after a penalty shoot out win. Paddy Farrell scored in normal time to give Villa the lead but Tullamore equalised and with no further goals scored through normal time and then extra time, a penalty shoot out was required. The shoot out was a nail biting affair but after Declan Hennessy converted Villa’s ninth penalty, John Farrell made a famous save from Tullamore’s next effort to complete a 7-6 shoot out win and a famous treble.

More success followed the next season when they won their third successive Premier League title and they completed the double two days after clinching the league title by beating Horseleap 3-0 in the final of the Whiteley cup thanks to goals from Martin Farrell, Paul Kelly and Declan Hennessy.

Villa lifted their fifth Whiteley Cup of the decade in 1987 when the Kelly brothers combined for the only goal of the game against Athlone Apparel, Mick crossing for Paul to score off his left foot.

Another hugely memorable win for Villa came in the 1989 Sheeran Cup final against Suncroft. The two Kildare rivals drew 1-1 after extra time in the first game in front of a huge crowd in Dalymount Park, Kevin Farrell with the opening goal for Villa after a Matt McGuinness cross before Anthony Ennis equalised.

Villa made no mistake in the replay at Station Road in Newbridge and goals from Dick Caplice, a fabulous 30 yard effort by Martin Farrell, Kevin Farrell and Seamie Whelan secured a 4-0 win.

As the decade drew to a close many of the Villa players involved in that trophy laden era would be etched into club folklore for ever more. Martin Farrell and his brothers John, Paddy, Kevin and Eamon, Paul and Mark Kelly, Dick Caplice, Seamie Whelan and many more helped bring days that that were fondly remembered last Saturday night and will be on many more occasions in the future. Tommy O’Connell’s role as manager for much of the 80s is rightly revered too, so too John Cosgrave who had the difficult task of following in O’Connell’s footsteps but did so seamlessly. 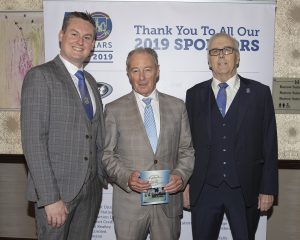 The 80s also saw Villa put down their permanent home. They bought Mullarney Park in 1983 and the pitch and grounds have been maintained to a high level ever since. Famously the club erected the clubhouse that is still used to this day in just 14 days in the summer of 1985.

When the Kildare and District League was formed in 1994 Villa joined as founder members and have gone on to have great success. They won three successive Premier Division Cups in the late 90s under three different managers – Buddy Abbott, Tommy O’Connell and Pat Costigan.

The team of 1999/2000 is another worthy of consideration when discussing the best ever Villa teams. With the pace of Malcolm Kirwan and youngster Bryan Byrne terrorising the Kildare League they won the Premier Division and then completed the double by lifting their first Lumsden Cup after beating Monasterevin 3-2. The winning goal in the final coming from a magnificent volley from outside the area by Richard ‘Sid’ Hickey. The likes of Hickey and Martin Farrell remained in 2000 from the 1989 Sheeran Cup winners but by then another certainty for any Villa Hall of Fame was between the posts. Alan Proctor became almost an ever present for Villa for over two decades from the early 90s and still put back on the gloves this season at 42 years of age when the team were stuck for goalkeeping options.

Around the turn of the century, local derbies against Mill Celtic became the stuff of legend. Mill got the better of Villa in the 2001 Premier Cup but the clubs were involved in a thrilling couple of weeks in the summer of 2002. On consecutive Sundays, Villa beat Mill in a penalty shoot out to lift the first Senior Division Cup but then were similarly beaten by Mill in the Lumsden Cup final after a shoot out the following week. Villa made up for that disappointment by winning the newly restructured KDFL Senior Division league by beating their great rivals on their own pitch in Mill Lane.

Another league title followed in 2006 and in the first season after the league turned to summer soccer in 2008, Liam Murphy led the team to an unbeaten league season to lift another Senior Division title.

The Lumsden Cup is something that Villa have always held dear and their win over Liffey Celtic in 2009 in many ways summed up the entire club. Villa were behind on three occasions but showed the kind of heart and determination that has characterised the club and fought back each time to eventually earn a 3-3 draw before Timmy Doyle scored the winning goal in extra time.

The following season, Mahon scored the only goal in the last game of the season to give ten man Villa a 1-0 win over title rivals Naas Utd at Mullarney Park and secure yet another KDFL Senior Division title and spark huge celebrations as they lifted the league trophy on their home ground.

Villa won their fourth Lumsden Cup in 2016, again beating Liffey Celtic, this time 2-0. Timmy Doyle was again the hero after he went in goal following the sending off of Proctor and he went on to save a penalty in a man of the match display.

Around that time, Villa fielded a ladies team for the first time and they followed in the footsteps of the club’s greats by winning league titles in successive seasons. 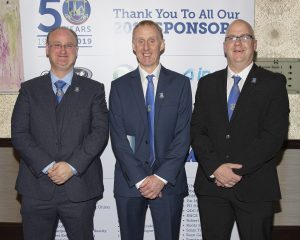 50 years of greatness has been the way for Villa and more success is sure to follow in the future, as evidenced last year by under 12 and 14 teams from the club running out to play against the academy side of the famous Barcelona club.

From the old school to the Nou Camp, it’s been a wonderful journey for this club and they have plenty more to do yet.