Who has the edge after Sunday’s draw?

WHEN Barry Coffey somehow found the target from a ridiculous angle with the last kick of last Sunday’s we were left with just the sixth draw in the Kildare Senior Football Final in the last 30 or so years and the first since 2014. 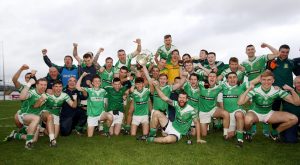 Looking over those results there are few clues as to whether Sarsfields have now gained the physiological upperhand ahead of Sunday’s replay, although they have now been involved in the last five drawn finals.

In 1988, Carbury found themselves 0-8 to 0-3 behind against local rivals Johnstownbridge with 20 minutes to play but hit back with five points in a row to level the game. Declan Kerrigan and Barry O’Donoghue scored to put Johnstownbridge back in front and within touching distance of their just their second senior title but Carbury struck back with late points from Jimmy Kelly and Kieran Daly to earn a 0-10 draw.

However, that was just prolonging their fate and Johnstownbridge made sure of winning the replay when Paddy O’Donoghue shot past 42-year-old Ollie Crinnigan, in his last SFC final after winning seven titles, to give the ‘Bridge a 1-10 to 0-8 win.

1992 was the next final that required a replay. Before the current Moorefield team, the 1992 Clane team were the last side to reach a final after winning the previous two titles but their chances of a three-in-row seemed to be blown out of the water when Sarsfields scored the first eight points inside the opening 17 minutes. However, Clane battled back and Sarsfields didn’t score in the last 20 minutes and the men in white scored the last five points of the game, Paul McLoughlin’s 57th minute free tied the game for the only time in the game at 0-11 each with the last score of the game.

Clane looked set to win the replay when 0-10 to 0-8 ahead with just three minutes of normal time to play but a youthful Sarsfields team forced another draw when John Whelan and Niall Buckley (free) scored in the dying minutes. That meant extra time was needed, 15 minutes a side in those days, and Clane scored the first three points. They were still 0-15 to 0-12 ahead in the second half of extra time but an  Enda Freaney goal helped swing things Sarsfields’ way and they eventually won 1-15 to 0-16.

That was the last draw in a senior final until 2005. St Laurences were on the verge of history and just seconds away from their first ever title when Padraig Brennan, only on the pitch less than a minute after only returning to the county from UN duty a week earlier, kicked an injury time equaliser from a free.

Sarsfields made the most of their let off and with Brennan scoring six points after being recalled to starting 15 they beat Laurences 1-11 to 0-9, a Ciaran Dempsey goal midway through the second half proving crucial.

It was a similar position for Sarsfields three years later when they took on a Celbridge team looking for their first senior title. Again, they needed a late free to save themselves in the first game, this time Paddy Campbell stepping up in their hour of need to earn a 0-7 apiece draw.

The replay was just as tightly contested but this time Sarsfields couldn’t find a way to get over the line and a Mark O’Sullivan inspired Celbridge won 1-9 to 0-10.

There was more replay pain for Sarsfields in 2014. After losing the previous four finals when they met their big rivals Moorefield, they looked set to finally end that hoodoo. Ray Cahill kicked ten points in a majestic individual display and Sarsfields led by five points with 11 minutes to play. Moorefield came storming back though and scored the last five points of the game and Adam Tyrrell’s injury time equaliser meant a second game between the Newbridge rivals.

Sarsfields made a blistering start to the replay when Robbie Confrey scored a goal inside the opening 90 seconds but that was as good as it got for the Sash and Moorefield ended up running away with things in 1-15 to 1-6 win.

Whether Sunday’s upcoming replay will follow any of the patterns of the games above remains to be seen. Perhaps Sarsfields will get the boost following Coffey’s last gasp leveller or maybe Moorefield have spotted something that could give them the edge, either way it’s sure to be another keenly contested final.