FRUSTRATIONS over an unresolved dispute between four former workers and the Irish Wheelchair Association (IWA) led to a picket outside the association’s unit on the St Vincent’s campus in Athy last week. A spokesperson for the four workers claimed they were given “a verbal agreement that was shaken on that day” at a meeting with in February at the IWA’s base in Clontarf, but that “they reneged on it”.

However, in a statement issued last Thursday, a spokesperson for the IWA stated: “As far as Irish Wheelchair Association is concerned, no agreement of any kind has been made with the former employees, who are currently protesting outside our community centre in Athy.”

The dispute stretches back to August 2018 when the four people – two Community Employment (CE) workers, and two IWA staffers – highlighted a number of grievances they had at the Woodstock Street unit with IWA management. “It was mainly to do with the treatment of people by staff … but a lot of it relates to management,” explained local councillor Aoife Breslin, a former SIPTU negotiator. “They had meetings and hearings with the IWA, but, to tell the truth, it was never resolved.” 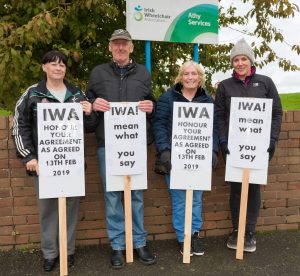 At first, the two CE workers weren’t given contract renewals despite being entitled to because of their age, and then in November the two IWA employees grudgingly took redundancy. “It was completely stressful [there], and we couldn’t stick it any further,” said Catherine Doyle, one of the protesters. “Our positions weren’t supposed to be filled, but they were advertised within two weeks.”

This eventually led to the February meeting where the workers say they were initially offered reinstatement, but said they couldn’t go back “with all that had been going on”. The workers allege they were made a verbal offer of an apology, reference and compensation by a representative of the IWA and, according to Catherine, it is the non-implementation of this offer that has led to the present stand-off.

“We would prefer to mediate than go to the Labour Court,” she said. “We did everything in compliance with regulations and policy. The reasons we were off work was work-related stress. All four of us have attended our doctors over this. All that was left was to protest,” she explained.

“We don’t want to disrupt the day of service users, absolutely not. We want IWA attendees to get your services. It’s not about that; we just want to highlight our grievances,” she said.

“The legal route may be our only option, but it could be very expensive. All four of us are out of work for nearly a year now,” she said. “We were happy with the apology; the compensation was neither here nor there, but it was agreed. All we want is what they agreed on 13 February.” said Catherine.

“The IWA also employed two of the protesters under the CE scheme, and their employment ceased when it came to it’s a natural conclusion. They are therefore also not entitled to any additional compensation.