FOOTBALL has always been a huge part of Lauren Kelly’s life and like any football mad child kicking a ball around the garden for hours on end she had dreams of what she wanted to achieve. 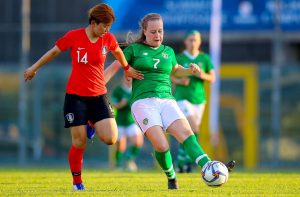 It’s been quite the season already for Laurn Kelly and now she is set to play for Wexford Youths in the Womens FAI Cup Final at the Aviva Stadium
Photo: ©INPHO/Tommy Dickson

Back in July, the 20-year-old striker scored the only goal as Ireland beat Brazil in the World University Games in Italy.

“When I look back to when I was kicking the ball around my garden for three or four hours a day, if you told me then that stuff like that would happen I would have grabbed it with both hands. Especially for it to be against Brazil, I was a big fan of Brazil when I was younger. Womens football in Brazil has always been strong so if I could choose to score against anybody it would be them,” said Kelly.

The goal wasn’t just any goal either, it was a wonder strike from 30 yards but even Kelly was taken aback by the reaction it got back home.

“I didn’t think it would get that sort of reaction. Going back to the dressing room afterwards I thought it was an average enough goal and the big reaction was because we had beaten Brazil but when I got back to Monasterevan every person I met wanted to talk about the goal,” she said. 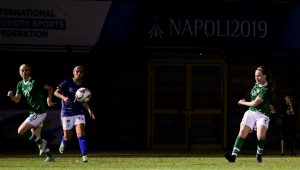 Ireland did better in that competition than expected but were denied a medal when beaten by Russia in the semi-finals after a penalty shoot-out.

Back to her club, Kelly scored the winner in a 2-1 win against Lithuanian side Gintra Universitetas in the Champions League but Wexford Youths just missed out on qualifying out of their group. Nonetheless, it was another dream achieved for Kelly.

“Playing in the Champions League was always something that I dreamed of when I was younger. It was a big thing for me when I was signing for Wexford, that’s another thing if you told me that I would do when I was younger I’d have said you were crazy. We were really unlucky not to qualify in the end, we won our last game 7-2 but we lost our first game and that cost us in the end,” she said.

Next Sunday will be another dream ticked off for Kelly when Wexford Youths play Peamount in the Womens FAI Cup Final. It’s a repeat of last year’s final which Wexford won 1-0. That was part of treble last year for Wexford but this season they have already lost the League Cup Final and Peamount were crowned league champions last week so Kelly and Wexford are determined to make the most of their last chance to win some silverware this season.

“Playing at the Aviva is an experience in itself but to go there and win the cup final would be unbelievable. I know we don’t get the biggest crowds but it is still an experience. Playing in stadiums like that is what you dream about when you are younger and it doesn’t really matter how many people are there. It’s one thing to play there but to win there would be great.

“Our squad has a good balance between youth and experience and there is good variety there too. I don’t think the league has been a good reflection of how good we’ve been. We started off a bit shaky but we’ve grown into it. There’s two cups and we reached both finals (Wexford lost 1-0 to Shelbourne in the League Cup final in July) but I think we need to win something. They won the treble last year so we don’t want to finish this season without winning a trophy. There’s such good players there like Kylie (Murphy) and Rianna (Jarrett) that we shouldn’t not believe we can it, especially after winning last year. The two squads are very similar to last year so I’m sure it will be a close game again and hopefully we can come out on the right side of it,” said Kelly.

And who would bet against Kelly scoring the winning goal after the season she has had so far?

*The Womens FAI Cup Final between Wexford Youths and Peamount is on Sunday 3 November at 12.05pm and is live on RTE 2.

In This Week’s Kildare Nationalist Sports….