The ceremony took place at Athy Fire Station, where members serving during the 2016 centenary were awarded commemoration medals also.

Rory McCarthy, of the coachbuilders Sidhean Teo, based in Spiddal, Co Galway handed over the keys to this long-awaited, €400,000 Class B fire engine which will replace the current 2002 registered vehicle located in the station.

The fire engine was funded by the Department of Housing, Planning and Local Government as part of the 2018-2020 Capital programme and represents a significant financial investment in the Fire Service in Athy. 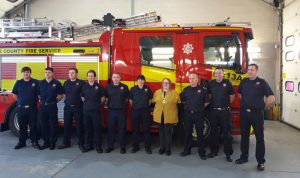 “The station in Athy responded to 266 incidents last year and as the town develops and expands it is important that the Fire Service is capable of continuing to respond to the needs of the local community. This new vehicle is one part of that response,” said Cllr Doyle.

The commemorative medals are currently being given out across the country and the crews in Monasterevin, Leixlip, Maynooth and Newbridge have already received theirs.

The purpose of this medal is to recognise the particular contribution that the Fire Service has made to the State since its foundation.

The event will be attended by the Cathaoirleach, Athy Town Manager Niall Morrissey, Rory McCarthy of Sidhean Teo, Celina Barrett, Chief Fire Officer, the Crew of Athy Fire Station and their families, as well as representatives of An Garda Síochána and the HSE.