IT’S next stop Spain for the Kildare Filipino Community Youth Dance Troupe, the winners of a recent multicultural dance competition held in Dublin’s National Basketball Arena on 12 October. The group, which also took the people’s choice award, claimed the prize of €1,000 and now go forward to the World IDF dance competition in Spain next May.

Ms Dugenio Conway has been involved with the troupe in terms of organisation – such as funding, lifts, food, costumes and more. She explained that at the competition in Tallaght the group performed a routine featuring different cultural dances from the Philippines, adding that they faced tough competition on the day and their performance went down well with the audience.

“[There] was a nice cheer actually, it was brilliant,” she said, adding that the members of the community are very supportive and thanking everybody for their support, including in terms of funding. 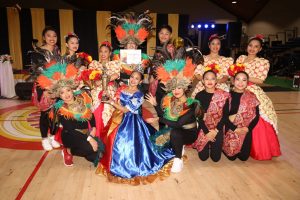 The youth dance group hasn’t been running very long and features 12 dancers aged between 11 and 21 from Newbridge and Naas. It’s clear that the dancers are quite committed – for the recent competition they had five weeks of “full on practice” on Fridays, Saturdays and Sundays for two to three hours at a time.

Thoughts now turn to next May and the competition in Spain, with plenty of practice undoubtedly on the cards between now and then. A chance to appear on a global stage would be a just reward for all of their efforts and would surely be an experience they’ll always remember.

“As I said to them,” Ms Dugenio Conway noted, “win or lose in Spain, at least it’s an experience.