Shackleton school shows how education and history can blend with tourism

SHACKLETON fans from all over the world descended on Athy over the Bank Holiday weekend for the 19th annual Ernest Shackleton Autumn School.

The school was officially launched by Mayor of Kildare Suzanne Doyle on Friday afternoon.

The weekend builds on themes of history, human spirit in all its incarnations, and leadership. All of these reflect the unique traits which have established Shackleton as a global role model – fearless but cautious, determined but egalitarian. 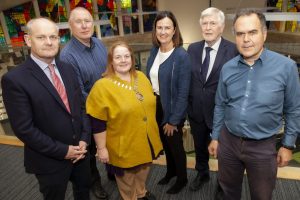 Speaking at the launch, Aine Mangan, CEO of Into Kildare commented;  The school continues to be a significant contributor to tourism in Kildare in the autumn and is a wonderful example of how education and history can blend with tourism in a very unique way.”

She said they were hugely proud that the school has recently been awarded a ‘Go Plastic Free’ accreditation which was testament to the work all the staff at the school have done to ensure the initiative has been implemented with such success.

Among the highlights from this year’s Autumn School were a celebration of the Irish contribution to pushing the boundaries of human endeavour with presentations on Edward Bransfield’s discovery of Antarctic; the 1969 Apollo 11 moon landing and Dirk Notz, a member of the influential InterParliamentary Climate Change Committee will speak on the importance of Polar Regions as a barometer of climate change.

The weekend would not be complete without a focussed presentation on Shackleton’s epic rescue in 1916 of his crew from the icebound Elephant Island.   Full details on this year’s school and line-up of activities can be found at:      www.shackletonmuseum.com