KILDARE Ploughing Association’s recent presentation event in Tougher’s was one of particular celebration for the Dunne family from Rathangan.

The ploughers were presented with a memento during the ceremony at the Naas venue on Thursday 17 October, with National Ploughing Association (NPA) managing director Anna May McHugh among those who attended. Denis, who is PRO for Kildare Ploughing Association, explained that the fact their family had three winners is what makes it “that bit more special this year”.

“It’s not often that you do so well, but it definitely doesn’t happen too often that a family does so well either,” he remarked, noting that they practice quite a lot in the springtime and coming up to the All-Ireland competition. “It’s like the lads playing football, training three nights a week… it’s our hobby and it’s what we take serious.” 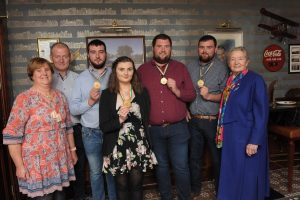 A fourth member of the family, Kieran, was also recognised on a “brilliant” night for winning the Three Furrow Junior class last year in the All-Ireland competition. “There’s four siblings in the family and four of them have All-Ireland medals now,” Denis added.

It’s a skill that’s very much in the family – Denis noted that they are a “three generation ploughing family” with “All-Ireland medals there going back through the years”. Their father John, an NPA director, was among those at the recent presentation evening. “He’s head coach now for the family at the moment!” said Denis.

The qualifying county round for next year’s All-Ireland will take place in early February and confidence is undoubtedly high. In between, Kildare Ploughing Association will hold a novice day on the last Sunday in January, at a venue yet to be determined, for anyone interesting in getting into ploughing – perhaps a future gold medal winner might come along.

“There’ll be someone there to help them and show them how to plough and that sort of stuff and get them going in a beginners class to get them interested,” said Denis. “They can make contact and we’ll arrange tractors and ploughs for them… it gives them just a chance to get interested, because it is an expensive hobby.”

For more details, keep an eye on their Facebook page @kildareploughingassoc.