ROAD safety came out as the biggest issue at last week’s public meeting in Kilcullen in relation to the proposed sand and gravel extraction site at Ballyshannon.

The meeting in Scoil Bhríde was facilitated by Kilcullen Community Action and was attended by around 50 local people in addition to members of the Ballyshannon Action Group, who had been invited to make a presentation.

Opening the meeting, KCA chair Ann Cashman said the group and those present were there to learn about what’s happening, and to find out what would be the impact on the community of Kilcullen. 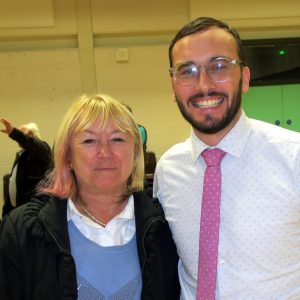 Matthew Burke of the Ballyshannon Action group then made a presentation on how to make objections to the planning application.

A presentation by Kilcullen resident Eoin Houlihan concentrated on the impact of extra trucks traffic in the town environs, including Junction 2 of the M9 where the proposers of the quarry say the trucks will join the motorway to distribute the extracted material in other Kilsaran plants in Dublin and elsewhere. He said the junction was, in his opinion, not a proper motorway one with access roundabouts to provide safe merging of traffic.

He said that with its schools, shops, restaurants and bars, and the Valley Park Fairy Trail, Kilcullen is a ‘place for families, who need to feel safe’. He also expressed scepticism at guarantees from Kilsaran executives that there would be no increase in truck traffic through the town from the Ballshannon facility.

In contributions from the floor, Old Kilcullen resident Pat Griffin spoke about the existing dangerous traffic conditions in the area, from Thompson’s Cross to Whitehall Cross and onwards to Ballyshannon, which he described as a ‘death trap’ where there have already been a number of serious accidents. He said 72 trucks a day as envisaged in the Ballyshannon proposal would create an ‘absolutely crazy’ situation.

Kilcullen resident JJ Warren warned against making anecdotal claims of safety issues involving trucks, as it ‘could backfire’ on the campaign. “Kilsaran will say they have a very good safety record, and they do have,” he said, noting the recent incidents in the town did not involve the company’s trucks. “They have also been very good employers in this area over 20 years,” he added.

Other contributions before the meeting was closed included concerns about the emissions and vibrations from increased numbers of trucks. In one case, the question was raised about the safety of the bridge in Kilcullen with HGV traffic on it daily.–