GUESTS from many parts of the country as well as England and France converged on Martin’s of Kildoon on Friday night 25 October to celebrate the 100th anniversary of the premises being in the same family.

The premises was purchased from  Peter Maher by J.J. (Joe) Martin from Carrowphadden, Kilmore, Co Roscommon on 29 October 1919 and it still run by his granddaughter Eilis Reilly (Martin) and husband Paddy Reilly since 1994.

Joe’s late son Brendan, a great colourful good humoured character, was at the helm for many years working alongside his father after his training in Offaly Street Athy where he cycled to and from daily.  He took over after his father’s death in in 1974.   Joe moved from Roscommon to Kildare to work in Cunningham’s in Suncroft (now The Croft Inn) and possibly Lower Williams Brownstown about 1910. 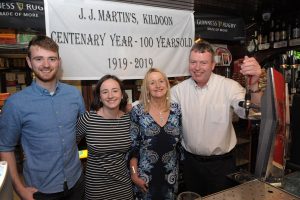 Brendan married Maire Tuttle from Rhode and later Stradbally and had three children Seán, Eilis and Brendan. Eilis’ husband Paddy hailed from Crossakiel, Kells in Meath and are parents to Clare and Brian.

A number of the 131 people who worked for varying lengths down through the years between shop/bar, farm and kitchen attended the anniversary celebrations. They included the longest serving staff member Peter Moran who worked there for 51 years.Eloquent speeches were delivered by Seán Martin, grandson of the original owner, and also by Paddy Reilly.

A video of photos and family history was compiled by Paddy Whelan and shown on the large screen throughout the night with personalised beer mats, scrolls and pens and 100 years banners to mark the occasion. A celebration cake bearing edible photos of the premises and the three couple who have run the business over three generations was enjoyed by the large crowd who attended.

The quaint compact grocery shop’s size and shape have basically remained the same with added modern fridges replacing the large weighing scales and large bins on the floor for animal and chicken feed.  It catered for all the local household and farming requirements.

The bar area was extended taking in the original kitchen and the need for the snug where ladies were permitted in former times no longer exist was also incorporated into the bar.  A new lounge was erected in the late 60s /early 70s and was recently redecorated.

Family relations friends and neighbours gathered for a brilliant night of reminiscing, song, music and fine food with plenty of hot lean bacon, cabbage and flowery potatoes cooked outdoors by James Higginbotham. and salads prepared and served by Miriam Howard.

Paul Ryan and friends provided live entertainment in the bar with Ray Montana in the lounge. A very entertaining night was had by all in the renowned premises which was packed to capacity.