BALLYMORE and Monasterevan both know the feeling of bringing a Leinster title back to their communities and that is something they would both dearly love to repeat this year, starting for both on Saturday afternoon. Both final victories were remarkable for their own reasons. Here we take a look back to Ballymore’s 2010 win, the final played in January 2011, and Monasterevan’s in 2012.

Every good story needs a superhero and in true comic book fashion, James Kavanagh left it until the last moment before arriving to save the day. 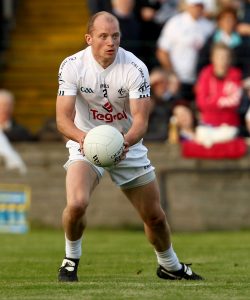 Since beating Timahoe in the semi final of this competition, just about everything that could have went wrong for this Ballymore team went against them.

Ballymore as a club and as a community worked so hard to get this final played on the last Saturday before Christmas but once Nobber refused to travel for the game it seemed that the gods had conspired against them.

Jarlath Gilroy already knew that the game would be refixed at a time when he would likely be without key players James Kavanagh and Colin Clarke but then the injuries hit. One of Clarke’s possible replacements Mark Headon broke a finger and wing forwards Peter Lawlor and Stephen Dwyer picked up serious injuries in a midweek challenge game against the Kildare junior side.

All the while, James Kavanagh was on the far side of the world taking a well earned month long break in Australia with his fiancée Linda but the news he was hearing from back home was making him uneasy.

A phone call to brother Eoin on Friday morning confirmed his fears. The whole cancellation saga as well as the mounting injury problems had hit the team hard, morale was down and James was needed by his club.

There was never any doubt about what he would do next. The flooding disaster in Australia had hampered James and Linda’s holidays plans and they had were already planning to spend the final two weeks of their time away in Thailand. After consultation with Linda, the decision was made to go Thailand but only after a slight detour through Ballymore.

Some of the players only heard the news when James walked into the dressing room at 12.30pm ahead of the 2pm throw in. The excitement caused by his arrival was palpable. The club were already determined that this would be a day to remember and Kavanagh’s arrival just lifted the buzz around the ground to a new level.

By throw in, that buzz had reached fever pitch and you sensed this was going to be Ballymore’s day.

Maybe the players sensed that too as they raced into a 0-5 to 0-1 lead after 13 minutes.

With all the talk of Kavanagh, it would be easy to assume that Ballymore are a one man team but they certainly aren’t. If you wanted to see a one man team, you needed to only look at their opposition who were totally reliant on Meath star Brian Farrell. But what a player he is. His first point of seven on the day reduced the gap but William O’Donoghue, normally a wing back but playing as a wing forward, landed his second and third points of the half to put Ballymore five ahead.

Ballymore’s injury jinx struck again when Tommie Archbold was forced off with a damaged shoulder in the 26th minute and the teams shared two points apiece in the final stages of the half to leave Ballymore ahead by 0-9 to 0-4 at the break.

Farrell and O’Donoghue hit points for their respective teams in the early stages of the half but Nobber had soon wrestled control of the game.

The brilliant Farrell scored three in a row and Gavin Farrelly’s 50th minute long range score left just a point between the teams.

A minute later centre half back John Doyle popped up with a crucial point to steady the Ballymore nerves.

Nobber midfielder Alan Farrell saw red four minutes from the end for a rough challenge on Tadhg Grace but Ballymore, and in particular the superb Pat Browne, still needed to defend stoutly to protect their lead. They repelled everything Nobber threw at them and then were given a chance to seal the win when they won a free just inside the Nobber ’45 and James Kavanagh trotted over to take it.

This was the moment he had flown home for. A Leinster title on the line, the ball in his hands. He took his time, took a deep breath and nailed his kick. Did anybody expect anything less?

The stand erupted but there was still time for one late scare. Brendan Heffernan won a high ball near the Ballymore goal and had time to turn and get his shot off but it went narrowly over.

Moments later the final whistle went and Ballymore were confirmed as Leinster champions.

With his work done, James and Linda were back in the air early on Monday morning and off to Thailand to complete their holiday. They arrive back on the morning of Ballymore’s All-Ireland semi final against Lisnaskea of Fermanagh when James will once again look to lift his team to new heights. Too often we are told our county players don’t care about their clubs but who could argue with the dedication of James? He flew half way around the world to win his club, his town, a Leinster title. The spirit of the GAA is alive and well in Ballymore, well done to all.

AN injury-time free-kick by Wayne Fitzpatrick ensured the greatest day in the history of Monasterevan after they clinched a Leinster intermediate title.

In a low scoring but nerve wracking game it looked like Monasterevan would pay for some wasteful finishing in the first half. There was just a solitary score on the board at half-time and although Monasterevan led then, they trailed by 0-3 to 0-1 with just eight minutes to play. Manager Paschal Kellaghan has instilled a tremendous spirit into this team during his short tenure with the club and it really came to the fore in those final eight minutes.

Having dominated the first half but failed to show it on the scoreboard, momentum shifted away from Monasterevan in the second half when O’Connells scored three points in the first 15 minutes but adversity brought the best from the Barrowside Blues. They moved up a gear and as their Louth counterparts wilted on home turf, Monasterevan got stronger. A wayward kickout by O’Connells goalkeeper Stuart Reynolds went straight over the sideline and from there he was ruthlessly punished. It was a feature of the game how quickly Monasterevan tried to get the ball back into play from dead balls and it was something Eoin Stapleton did on numerous occasions.

This time it was Shane O’Loughlin who reacted quickest. As the O’Connells defence switched off, O’Loughlin found Anthony Kavanagh and the centre-forward hit the target despite kicking under pressure. Suddenly belief, a word that Kelleghan has used time and again to describe the biggest thing he has brought to this group, coursed through the veins of the Monasterevan players.

This was their opportunity.

With five minutes to go, the pressure that Monasterevan were exerting forced another free inside the 45 following a failed short kick out by Reynolds. It left Fitzpatrick, who never really found his range from long range frees until the decisive moment, with a tricky kick from near the right touchline. As the bodies jostled for position outside the square waiting for Fitzpatrick to take the free, Lenny Havens made his way unnoticed into a great position 25 metres out. Fitzpatrick was alive to the opportunity and smartly fl icked the ball over to  Havens. Before the O’Connells defence realised what was happening the midfielder had the ball in his hands and sent it over the bar to tie the scores.

You got the feeling Monasterevan weren’t willing to wait until extra-time to settle this game and their cause was given another boost when O’Connells’ star player Mark Stanfield was shown a second yellow card for arguing with the referee. Monasterevan still needed a hero and they found one in the youngest player on the team. Before Fitzpatrick applied the finishing touches, hard work had to be done out the field. Mark Cornish made an important tackle to stop an O’Connells move developing before moving the ball into Kavanagh. The powerful centre-forward had made hard yards for Monasterevan all game and did so again but as he was striking his pass he was hit with a late tackle. That resulted in a free where the ball landed and Fitzpatrick, in just his sixth senior game, sent the ball soaring over the bar from 40 metres.

Monasterevan still had to survive a late scare when Paul McKeever missed the target from a very kickable free four minutes into injury time but moments later the final whistle blew to signify that Monasterevan had followed it the footsteps of Confey (2006), Maynooth (2009) and Ballymore (2010) by lifting this Leinster title. On the day it was the team ethic that got Monasterevan over the line. After leading Ballinabrackey of Meath to a title in 2010, this was Paschal Kellaghan’s second Leinster crown in three years – an incredible achievement.

The Rhode man has worked wonders on the banks of the Barrow this year but as he said afterwards it’s not about him – it’s about a club and a town who came out in their droves to  support. Now they can call themselves Leinster champions.

Monasterevan’s heroes of ’77 to be honoured on special night

‘Lifting that trophy was the best moment of my career’