ALICE Doran from Gormanstown, Kilcullen has been named Kildare Carer of the Year and a finalist in the Family Carers Ireland Netwatch Carer of the Year Awards 2019, taking place on Friday 22 November in Dublin’s Westin Hotel. She was nominated for the awards by her son Sean.

Alice, who was presented with the local award, flowers and a beautiful inscribed clock at a ceremony in Athy’s Clanard Court Hotel last week, has been caring for her son Eric for many years. “I couldn’t believe it,” she said. “I never won anything in my life!”

Eric, now 45, was diagnosed with Friedreich’s ataxia at the age of 11, a debilitating and degenerative disorder, and he is also diabetic. Alice’s daughter Kathryn explained that it was so rare at the time that their GP had never heard of it and that there was no support network back then – no counselling or physiotherapy appointments. 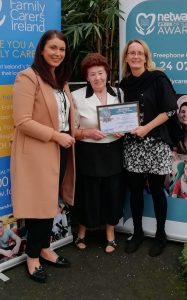 After screening, it was discovered that their youngest brother Joseph also suffered from it, and both resisted the use of a wheelchair. Kathryn said that their father, who died suddenly after a heart attack at the age of 53, had told Joseph to stay out of a wheelchair as long as he could. Joseph was just 25 years old when he lost his life.

Kathryn described Eric, who continued his education to master’s level, as very intelligent and said that he has described his body as being like “a train that has left the station and it’s just on a collision course and there’s nothing you can do to stop it”. She remarked that the hardest part for Alice, as a mother and a carer, is knowing that unlike some other conditions there’s no happy ending. “It’s a horrible, horrible disease,” she said.

Alice’s dedication to her son is clear and there’s no doubt that it’s a lot of responsibility. She has to be alert even at night because of her son’s blood sugar, but disagreed that it’s tough. “No, it’s not,” she said. “You don’t know anything else… it’s your life.”

Kathryn gave one clear example of that dedication, explaining that five years ago this Christmas, the day after Stephen’s night, her mother slipped, fell and shattered her wrist. Not wanting to disturb anyone over Christmas, it was early the next morning when she phoned Kathryn. Alice was taken to Naas hospital and then transferred to Tallaght and told she required surgery to have pins inserted. According to Kathryn, Alice was afraid that “if something happened to her under general anaesthetic, if she didn’t come around, there would be nobody to look after Eric. So, she insisted on them putting pins and plates in her wrist under local anaesthetic”.

Kathryn said that Alice doesn’t realise the esteem in which she’s held and if she had a euro for every person who described Alice as a living saint, “I’d be very wealthy”.

Alice will join other finalists from around the country in The Westin later this month and there will surely be plenty of support for the Gormanstown woman. Maggie Lally, Carers Support Manager for Family Carers Ireland in Kildare, noted that Alice is a winner in any case. “I think everybody that was nominated in Kildare are winners,” she said.