The only island distillery in the country has just produced its first 1,000 bottles of gin, the first step in an ambitious plan to boost the local economy which also includes developing a whiskey distillery.

Cape Clear Distillery has distilled the gin batch which is branded ‘3 Sq Miles’ – the size of the island.

Séamus Ó’Drisceoil, who is one of those leading the project, said the gin distillery was funded mostly by private local investors, but was also supported with grant aid from Údaras na Gaeltachta.

Locals built the distillery which is based in a seashore premises formerly used as a hatchery.

“With planning permission already in place for a full-scale whiskey distillery, this is the first step in an ambitious plan to develop the unique coastal site on a phased basis,” Mr Ó’Drisceoil said.

“With so many gins currently on the market an enormous effort has been expended to develop a quality gin that truly reflects the maritime nature of Cape Clear island and its landscape,” he said.

It took a team of local enthusiasts working with new product developer and distiller Ruth Court more than six months to finally achieve a distinctive recipe that all are genuinely very proud of. 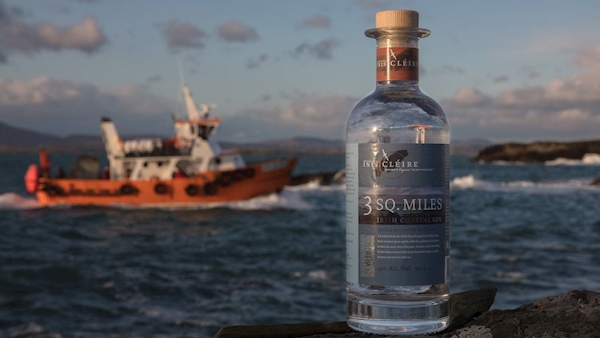 The ingredients included laminaria digitata, fuschia and honeysuckle and the result is described as a classic, bracing and full-flavoured gin with the fresh hand-foraged botanicals complementing but not overpowering the juniper base.

Those behind the project are already growing native Irish junipers on the island, some of which are growing in pots right outside the distillery door.

They plan to grow a number of other botanicals for their gin on the distillery site, while others will be harvested throughout the island.

The first 1,000 bottles are being produced under a unique label, and each bottle is marked with the number 1 to 1,000.

The distinctive brand was developed by expert distiller Terry Green to reflect the surrounding seascape.

Mr Ó’Drisceoil explained that to finance future development of the distilleries a new round of fundraising is to open shortly.

“We will shortly reopen to investors for subsequent phases and also offers an innovative €100 5% preference share orientated towards ‘fun’ investors. These will, for the most part, be redeemed against products from the company and are described as ‘super gift vouchers’ that appreciate in value the longer they are held. The company also markets distinctive glassware and other products,” Mr Ó’Drisceoil added.