Naas student is one of five chosen for Youth Assembly

FIVE students from Kildare will take part in the first-ever RTÉ Youth Assembly on Climate this Friday 15 November at Dáil Éireann.

Niamh Ahmed (10), Ruby-Jo Cowdell (10), Yvonne Farrell (16), Ciara Gallagher (16) and Evan Pereira (16) will be among the 157 delegates representing all 26 counties. The youth assembly is a chance for young people to discuss what Ireland needs to do to take action on climate and environmental issues.

The session in the Dáil chamber will be broadcast on RTÉ News Now and Oireachtas TV. The candidates will also get a chance to present their views to our elected officials and, afterwards, all are invited to a reception at RTÉ while some delegates will be on the Late Late Show that evening. 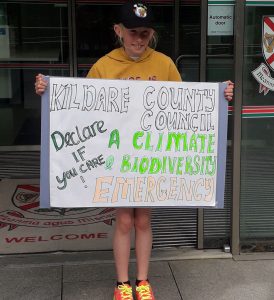 Niamh lives in Clane and attends Maynooth Educate Together National School. She became interested in climate change when she visited Bangladesh last summer and had to travel to her grandfather’s village by boat because of flooding. Yvonne is secretary of Kildare Comhairle na nÓg and has spoken in the European Parliament and taken part in the strike for Fridays for Future, while Ciara from Johnstownbridge feels rural regions are underrepresented in discussions about climate change.

Evan Pereira, a member of the Green Party, is also involved in Kildare Comhairle na nÓg and believes that more investment is required in public transport and electric vehicles, alongside a need to support communities around Ireland to ensure no area is left behind in environmental protection. Ruby-Jo, who attends Mercy Convent in Naas, became passionate about the environment after visiting ‘Cool Planet’ and is involved in the No Planet B Club Naas, Extinction Rebellion and School Strikes 4 Climate.

“When Aine from RTÉ phoned to say I was shortlisted I was excited. When she asked me more questions on the phone to see if I could get in I had butterflies in my belly! Eventually when I got the news I had been chosen I was jumping around with joy and told all my family members the good news,” said Ruby-Jo, who explained that she’s excited about going into the Dáil.

“I’m looking forward to voting on the proposals that will go ahead to our Taoiseach as well. I think the Government isn’t doing enough and that by all of us in the youth parliament going in we will set a good example for them and they will try to do more environmental stuff and bring in new laws to help save our planet.

“I am delighted with all the support I’m getting from my friends at school and my teacher. When I read my proposal out in class for a practice round they all shouted ‘go Ruby!’”

Mum Niamh is very proud of her daughter and said that alongside setting up the No Planet B Club in Naas with her friends, Ruby-Jo has done talks on climate change including in Naas library.

“She is very engaged with the climate crisis and I’m so happy that she was chosen to be a candidate for the youth assembly. From when she first heard about climate change, just over a year ago, she has learnt so much and been incredibly active in trying to raise awareness about the crisis we face,” she said.

“Ruby believes that everyone has a role to play in helping to save our planet and she has made a lot of practical changes in her own young life, so much so that even on a very wet rainy day she still insists on walking to school. I feel sad that saving our planet has become the plight of the youth and like Ruby I’m incredibly disappointed that our Government gave us false hope by calling an emergency but not acting on it and for not informing the people of Ireland of the severity of what we are facing.”