Kildare scores on the double at national Q Mark awards

TWO KILDARE not-for-profits can smile contentedly for the next 12 months after their efforts at professional probity and standards saw them receive a Q Mark Award at a gala ceremony in Dublin recently. The awards mean that both the Irish Wheelchair Association’s Assisted Living Services in Athy and Clane, as well as the Kildare Local Employment Service Network (KLESN) in Naas received a minimum of 87% in their rigorous audits, putting them in the top 6% of businesses nationally.

There was even room for a third Kildare firm on the celebration dais as Heaphy’s Spar from Allenwood also won as part of the larger H2 Group, which operates a network of award-winning stores across Ireland in partnership with BWG Spar and Texaco fuel since 2014.

The gala event was a chance for all those nominated to celebrate the high standards they’d achieved in rigorous audits by the Excellence Ireland Quality Association (EIQA), the organisation behind the Q Mark quality standards. The Irish Wheelchair Association is a not-for-profit enterprise advocating for an inclusive society, providing quality-assured community services that enable people with physical disabilities live independent lives at home in Kildare. 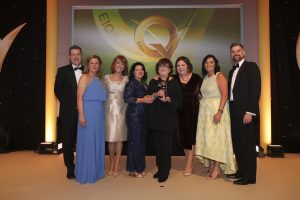 Pictured at the National Q Mark Awards were Soraid McEntee from EIQA (second from left), with the team from the Irish Wheelchair Association

The IWA has been nominated for a Q Mark Award every year for the last six years, and they won an overall Award for the ‘Best Not for Profit Company for Business Management Systems’ back in 2014.

KLESN is a free and confidential service helping unemployed people to find work, by providing training, advice, supports and upskilling, while ensuring that local employers avail of employment incentives and suitable candidates. The KLESN team has been involved in EIQA’s Q Mark process for four years and has been nominated twice.

All of the IWA’s hard work paid off on awards night when it was announced as the overall winner of the Q Mark for Quality Management Systems, Recognised for Excellence.

“Winning the Q Mark Award is a huge honour for IWA employees, customers and volunteers, and has validated the hard work that is ongoing which has built the organisation into the thriving business that it is today,” said IWA chairman Martin Kelly.

Clodagh Judge, chief executive at KLESN, commented: “KLESN, in our continuous pursuit of excellence, are overjoyed at being nominated for the Q Mark Awards. Thank you to the wonderfully diligent team at EIQA, to our board of directors for their expertise and to our team for accepting all challenges – we did it!”
Deli manager at Heaphy’s in Allenwood, Marianna Vasvari, said: “It is a fantastic award to be nominated for each year and we have worked really hard each year to continue to improve on our standards, as winning this award means the world to us.”