THERE have been times that it seemed like Eric Donovan’s life was straight from a scripted Hollywood film.

In true Hollywood style he came through a tough upbringing to reach the top of the amateur ranks. He has spoken in the past about his troubles with depression and alcohol but he came through those years to become one of Ireland’s best ever amateurs. After three years out of the ring and away from boxing, he returned, became a professional and flew through anything put in front of him. 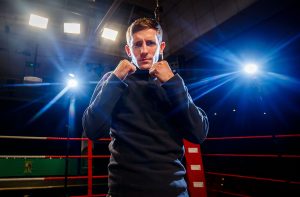 The wait goes on. Eric Donovan is ready and waiting to step into the ring with any featherweight or super-featherweight near the top of the European rankings as he chases a belt but opportunities have been slow to arise for him
Photo: ©INPHO/Oisin Keniry

The night when he defeated Stepehen McAfee last March to lift the Irish title could have been a fine ending to any movie but Donovan wanted that to be a stepping stone rather than a finishing point. He wasn’t long in the professional ranks when he realised that his ability put him on a European level rather than just domestic but since that McAfee fight Donovan has found himself in a Catch 22 situation.

The latest EBU rankings for European featherweights place Donovan at 21 and his problem is that it is hard to make a big jump up the rankings without beating somebody ranked higher than him but the Athy boxer is too good for those fighters above him to want to risk their own rankings.

“If you are a boxer and you believe you are worthy of your ranking then you are supposed to fight, what’s the point in not fighting?” queries Donovan. Fighters fight and it’s an attitude that he can’t understand.

“There’s too many people in the hierarchy of boxing, in the top 20 of the world, something like that, who have got themselves in a very privileged position and they are using their status to say that you are in my rearview mirror. On paper and statistically that might be true but in the ring it is a different story and I believe that if I got my chance to fight any of those guys at the top then I think they’d be in for a big fright,” said Donovan, before adding – “and that is why I don’t get these fights.”

Recently, Donovan was involved in something of a social media spat with Dubliner Jono Carroll when he offered to step in to replace Scott Quigg after he pulled out of their scheduled bout.

Carroll was quite dismissive and insulting about what a fight against Donovan would do for him but Donovan just wants one shot to show he can compete against anybody.

“There’s people in the boxing world saying ‘Who do you think you are? You were a big name in the amateurs but not in the professional ranks’ but everybody has to start somewhere.

“Even Jono Carroll, who has he boxed?

“Who have you boxed he said to me, name one lad with a name that you have fought he said.

“I’ve boxed two lads he fought. Gonzalez, who I boxed in Dublin, had good success against Carroll, although Jono won the fight well in the end, but he never laid a glove on me. And in actual fact, I fought that fight with my pins and needles in both my hands because the gloves were tied too tight. The lads that we both boxed (Damian Lawniczak as well) had success against Jono even though he won both comfortably, they were able to hit him, get inside and stand with him. Neither of them ever laid a glove on me.

“He fought two world class fighters, the French guy (Guillaume Frenois) who he drew with even though I thought the French guy won it and Tevin Farmer, he went the 12 rounds with Farmer but he took a lot of punishment and took a beating for 12 rounds,” said Donovan.

Fighting Carroll would mean Donovan stepping up from 57kg to 59kg but he would do that in a blink of an eye.

“I’d fight any of those lads at the top of those rankings, no problem. Super-featherweight is not even my weight but I would step into that weight comfortably. I’m a 57kg featherweight, he boxes at 59kg but I’d have no problem stepping in against anybody in either of those two weights.

“I’m not saying Jono is dodging me but I just think that the guys at the top level, the promoters, they are the guys that make the fights and maybe I am not a big enough name for them yet. Maybe I have to earn my stripes but I am doing everything I can on my part, it’s up to Leonard Gunning (Donovan’s manager) now to get me my fights,” said Donovan.

Incredibly, in a world where YouTubers can make millions with BoxOffice fights, somebody as skilled, talented and dedicated as Donovan is facing into losing money to fight in Glasgow this weekend so it’s little wonder that at 34 years of age he is starting to wonder whether it is worth it all.

“I’m fighting in Glasgow at the weekend and I’m probably short about 10, 15 tickets to cover my expenses so that will have to come out of my pocket. It’s terrible but that’s the way it is for me,” he said.

And yet, the hunger to prove his worth keeps him going and he is already looking ahead to a fight against Spaniard Cristian Montilla in February in Belfast.

“This one in Glasgow will be a routine fight but the one I have locked in for 1 February will be my toughest fight to date and will be a great measuring stick for me. He has a draw on his record against the current European champion. I want to see how close I am to that level.

“I want to make that breakthrough because I’m starting to think about maybe hanging up the gloves if I don’t get that big fight in 2020 because I am putting an awful lot of time and effort into boxing. Sometimes I feel like that I stuck in the same position. I’m getting married next July. I just don’t want to be chasing my tail for the next two or three years so hopefully within the next 12 months I can get my shot,” said Donovan.

He thought that a European title shot was in the bag last October only for Carlos Ramos to pull out and go in a different direction.

“I agreed to everything, the purse, it was in Madrid against Ramos. The deal wasn’t great but I had the conviction and belief that I could go out there and beat him in his back yard. He chose to fight somebody else and we were really upset about that, we were very close,” said Donovan.

Despite the frustrations that have followed in the recent months Donovan has no regrets about turning pro and even if he hangs up the gloves with the regret of not being about to box at the highest level he could, he will always hold dear the memories of the night he won the Irish title in the National Stadium.

“When I turned pro I said if I could get an Irish title that would be amazing and that night was hugely special for me and my family. But when I got that far and I saw how easily I dealt with every challenge it was then that I questioned my own ambition and began to think that I was underestimating myself. I didn’t realise what I had left in the tank after three years out of the ring but when I started coming back and I thought I was going so well so I raised the bar and set that European title as the marker. If I can get there then great, if not it’s not the end of the world. It will be a little bit bitter though, knowing that I came so close and it didn’t work out but at the end of the day, I thought I would never box again so it was great to win that Irish title,” he said.

Since that fantastic night when he was crowned Irish champion Donovan has suffered more blows out of the ring than he ever did in it as he chases his dream. For now, he’ll keep rolling with the punches but he knows this situation can’t last forever and if his big opportunity doesn’t come soon then it never will.  If it does come, he’ll be ready and he might just get that fairytale ending that he so craves. Nobody would deserve it more.