NAAS completed an amazing year for the club by lifting not one, but two county football titles on Sunday afternoon in St Conleths Park. After their U17s beat Clane by 3-13 to 1-17 in the first of today’s double header, Naas added the U21 crown to their unprecedented trophy haul this year. 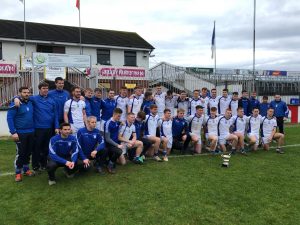 Niall Cronin’s team were hot favourites to the win the game before a ball was thrown in but they were pushed all the way by a dogged Celbridge side and it was only when Naas scored the last three points of the game in injury time that there was clear daylight between the teams.

Only Dallan Gallagher’s 26th minute goal separated the sides at half time after a tightly contested first half.

Naas threatened to pull away early in the second half when they led by four points on a couple of occasions but when Darragh Archbold converted a penalty in the 40th minute after Niall O’Regan had been fouled by Alex Beirne there was only one between the teams.

However, it always seemed that Naas had another gear to move into and the crucial moment of the game arrived in the 48th minute when Paddy McDermott carried the ball deep into Celbridge territory and laid the ball off to James Burke who fired home for Naas’ second goal of the game.

Celbridge stuck to their task and could have got to within two points of Naas heading into injury time but one of their best players on the day, Darragh Murphy, dropped a late free short and after that, Ciaran Doyle, Luke Griffin and Tom Browne rounded out the scoring to ensure that the 2019 season finished with yet another trophy for Naas.