THE Kildare footballers and hurlers will begin their National League campaigns in St Conleths Park on 26 January as the Newbridge venue hosts the first of two double headers this season.

Promotion is high on the list of priorities for both Jack O’Connor and David Herity and both managers will hope for the backing of a large crowd for the first game of the season. 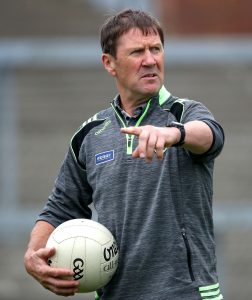 Jack O’Connor’s first league game in charge of Kildare will be against Fermanagh as part of a double header with the KIldare hurlers also playing London on the same day
Photo: ©INPHO/Bryan Keane

The hurlers will get things underway when they play London at 12.30pm and that will be followed by the footballers playing Fermanagh at 2.30pm.

There will also be a double header against Roscommon on 23 February when the hurlers meet the Connacht side at 12.30ppm and that will be followed by a meeting between the two counties’ footballers at 2.30pm.

Preparations for both Kildare teams are well underway and they will shortly take to the field as their pre-season starts in earnest. The hurlers play Offaly on Saturday 30 November at 2pm in Birr in the first game in the Kehoe Cup, followed by a home tie against Down on 8 December.

The footballers will play their first O’Byrne Cup game under new manager Jack O’Connor on 7 December in St Conleths Park against Longford at 2pm and then a week later travel to face Davy Burke’s Wicklow team.