McDonalds on M9 will employ 70 people

THE man who first brought McDonald’s to Kildare over 20 years ago is about to open Ireland’s 95th such restaurant at the new M9 services at Kilcullen, between Junctions 2 and 3. The new 24/7 venture will employ 70 people, seat 86 when full, and cost €750,000 to install.

McDonald’s Kilcullen will be operated by franchisee Sean Quirke, who owns and operates four other restaurants, two in Naas and Newbridge in Kildare, as well as at The Ilac Centre and Mary Street in Dublin 1. Sean Quirke brought the first McDonald’s to Co Kildare in 1998, when he opened the Naas town restaurant. 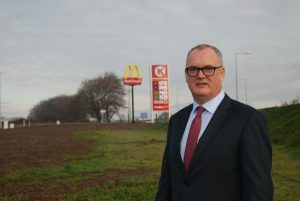 McDonalds Kilcullen will be operated by franchisee Sean Quirke

McDonald’s in Kilcullen plans to offer table service to its customers and self-order kiosks, which will allow customers to make more personalised food choices.
“I am very excited to officially open this new restaurant in Kilcullen and we can’t wait to welcome our customers through the doors,” said Mr Quirke at the restaurant’s grand opening last week.
Like all McDonald’s restaurants across Ireland, the beef, bacon, milk, water and eggs served in McDonald’s Kilcullen will be 100% Irish. There are 95 McDonald’s restaurants in operation in Ireland, 90% of which are owned and operated by 22 franchisees.

McDonald’s was first established in Ireland in 1977 and since then has grown its workforce to more than 5,000. McDonald’s Europe is the single largest purchaser of Irish beef by volume and one in every five hamburgers sold in McDonald’s across Europe every year is of Irish origin.