SCOIL Mhuire Clane’s future in this year’s Bro Bosco Cup is out of their hands after they were beaten in Athlone today. 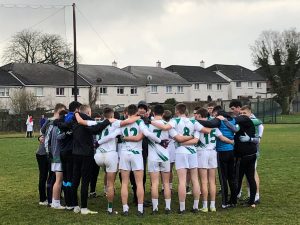 After drawing on their own pitch against Moate in the first game of the competition, Clane knew that really, they needed a win to keep them in the hunt for a top two position their group would have qualified them for the knockout stages. They seemed well placed to do that after Oisin O’Sullivan’s sweetly struck goal in the 39th minute put them five points clear but they only scored one further point as the home side turned the screw in the final quarter.

The first half was nip and tuck all the way along but an injury time point from Leinster minor winning corner back, although playing at centre forward for his school, Tommy Gill, put Clane 0-7 to 0-6 ahead at half time.

Clane had plenty of possession throughout the game but it was only in the the opening ten minutes of the second half that they really put it to good use, culminating in a brilliant shot from O’Sullivan that flew into the Athlone net to put them ahead by 1-9 to 0-7.

Instead of kicking on and seeing out the game from there, Clane wilted as the home side came flying back with five points in a row in the space of ten minutes. That last of points came after Feraghus Lennon converted a free after Daniel O’Gorman was shown a second yellow card for a foul on Brian Monaghan, leaving Clane down to 14 men. Athlone took full advantage of that five minutes later when a flowing move cut open the Clane defence and Lennon found the net with a neat finish. 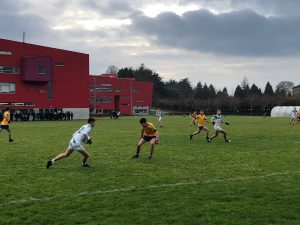 Clane almost responded immediately but another brilliantly struck shot by O’Sullivan was superbly tipped onto the bar by Gary Martin.

An Eoghan O’Haire free briefly got Clane back to within two points of their hosts but Athlone made sure of the win when Dylan Keegan fired home their second goal in the first minute of injury time.

Athlone will now meet Moate CS in the final game to see who tops the group and only an Athlone win by six or more points will see Clane qualify for the knockout stages.

Elsewhere, reigning champions Naas CBS comfortably beat St Benildus by 4-22 to 1-8 for their second win in the group and ensure they have qualified for the knockout stages with the minimum of fuss. James Dalton, Alex Beirne, Simon Murphy and Neil Aherne scored their goals in an impressive win.