Santa gets a Newbridge welcome!

LITTLE faces lit up at the weekend as Newbridge welcomed a very special guest from the North Pole, when Santa Claus arrived to take up his annual residence at the Whitewater Shopping Centre.

The best of Kildare welcomes were presented as Mr and Mrs Claus were escorted in a horse-drawn carriage through the town by the local Patrician Primary School Band with a medley of festive favourites. Obviously, with this degree of excitement for such an important guest, local gardaí had to assist with traffic management and helped bring Santa from the garda station to his Newbridge base in Whitewater. 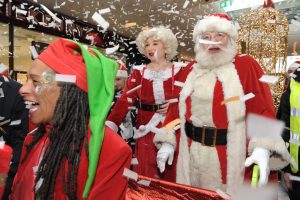 Santa and Mrs Claus, with their elf entourage, make a stately procession through Whitewater Shopping Centre in Newbridge on Saturday
Photos: Jimmy Fullam

On arrival at the centre, the Clauses were met by a band of drummers and they continued the journey on his silver sleigh, moving through the mall to his enchanted grotto, located in the Sports Lounge.

Obviously not wanting their special guest to get homesick during his visit, the management at the Whitewater offered a little bit of seasonal magic with a flurry of indoor snow falls as the sound of The Little Drummer Boy resonated throughout the shopping centre.

Once he settled into his Newbridge home, Santa and his friendly helpers will be welcoming visitors until Christmas Eve, and meeting Santa is free for all. Instead of paying to visit Santa, donations are invited to the charity Irish Guide Dogs for the Blind.

And Newbridge will continue that Christmassy feeling when the town switches on its Christmas lights on Sunday 1 December at 4 pm on Georges Street. Santa will be making an appearance at this event, too, and children are invited to bring their Santa letters along for delivery to the North Pole. There will also be some music, fun and treats and surprises for the children at this lovely family event.