The special place that is the Curragh

THERE was a great turnout for a public seminar held in Newbridge’s Keadeen Hotel on Saturday 16 November, which explored ‘Aspects of the Curragh’. A wide range of topics relevant to the Curragh were up for discussion on the day, including its military and racing heritage, place names, archaeology and the unique landscape and flora. The organisers have said there are preliminary plans to organise a follow-up event to act on some of the suggestions and presentations made at the seminar.

The event, which was organised by Kildare County Council (KCC) and the County Kildare Archaeological Society, with support from Creative Ireland, featured representatives from the Defence Forces, Department of Defence, the county council, the Curragh Racecourse and other stakeholders. Former chief superintendent of the Phoenix Park, Dr John McCullen, highlighted how a public space such as the Curragh could be managed into the future. The possibility of the Curragh applying in the future for UNESCO World Heritage Site status was also discussed. 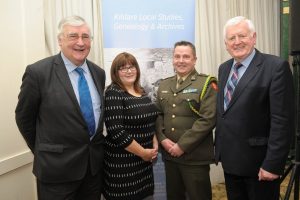 Following its launch at the seminar, the complete archive of the County Kildare Archaeological Society’s journal, dating back to 1891, was made freely available online through a new digital archive, while ceann comhairle Seán Ó Fearghaíl launched the new edition of speaker Dr John Feehan’s seminal work Cuirreach Life – The Curragh of Kildare in a more accessible format. The event concluded with the launch of an audioguide from Abarta Heritage titled The Story of the Curragh.

“It was a great day,” said James Durney, who gave a talk at the event. “Everybody was happy with it.”

“We just need to protect it,” he added of the Curragh, “and make sure that people have the same respect for it that they should have and that we have.”

Similar sentiments were shared on social media afterwards by local councillor Fiona McLoughlin Healy, who described the Curragh as a ‘unique amenity’.

‘Today’s seminar was a fantastic opportunity to remind ourselves and others of the immense environmental, archaeological, historical and cultural significance of the Curragh,’ she wrote on Facebook. ‘I truly hope it becomes a launch pad for real action for the management and protection of the Curragh Plains.’