TO maintain an excellent alliteration for a charity concert, a country DJ combined the Big C Choir, Carnegie Hall and a kid from Coleraine to raise €1,800 for three local worthies recently.

Kildare FM’s Liam Kett put his address book and broad shoulders to work to organise a concert and dance in aid of the Naas Oncology Unit, Cancer Support Newbridge, and the Kildare branch of MS Ireland in Tougher’s of Newhall last week.

“I had a phone call from Andy Cooney, one of the New York Tenors, a few months back, saying he had a concert in Limerick on his way back from Medjugorje, but had a few days off after that, and could we put something together,” explained Liam. 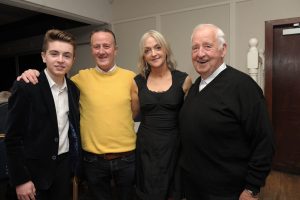 For a singer who has sold out Carnegie Hall nine times and sung with Crystal Gayle and Phil Coulter, this was something Liam wasn’t going to let go. “I had done MC with the Big C Choir – all survivors, 45 of them in it – and so when Andy called, I told him ‘have I got the crew for you’,” said Liam.

“That’s where the germination came from,” he said simply. “He’s a very affable guy, and was very happy to row in behind. He brought the Conquerors Band from Galway, so on the night we had a two-hour concert, and an hour-and-a-half of dancing.

“We got in singer Vicki Cahill from Newbridge and 16-year-old Eoin Mac from Coleraine, who has just released his fifth album, and tours with country star Michael English,” explained Liam.

“We’ve tried this concert and dancing before and it works – and any publicity the Big C Choir gets, the better it is.”

Yesterday evening (25 November), Liam was able to present a cheque for €600 each to the three local charities – and all from one phone call from an old mate.