NAAS man Billy Dardis will make history in Dubai on Thursday when he leads out the Ireland men’s sevens team for their debut as a core nation on the World Series circuit. 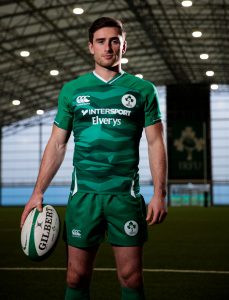 Having previously competed in tournaments as an invitational side – a third-place finish at the 2018 London 7s proving to be the highlight to date – Anthony Eddy’s outfit finally secured full status with an outstanding triumph at the Hong Kong 7s in April.

It has been a long road to get to this point and Dardis (who joined the set-up in 2015) is looking to embrace every moment.

“It has been a long four or five years building up to it. Started about four years ago, the lads started in Bosnia or somewhere like that. There has been so many players who have come through it. A lot of lads who’ve got international caps and are now playing regularly in the PRO14,” Dardis acknowledged.

“A lot of time from IRFU staff and our coaches has gone into it. It’s finally here, which is brilliant. Since April and Hong Kong, we’ve been waiting to get going into Dubai. It’ll be great fun just getting over there, getting stuck into it.”

Ireland’s campaign in Dubai gets underway on with a Pool B encounter against USA (6.12pm local time/2.12pm Irish time). They also face Australia and Scotland on Friday, before they proceed to the play-offs or finals that are taking place at The Dubai Sevens Stadium on Saturday.

While Dardis is reluctant to set a target for this weekend – and their trip to Cape Town in mid-December – the presence of former South African sevens star Kyle Brown in the backroom team is helping to aid their preparation.

“He [Brown] was with them for just over 10 years, he was captain with them for six years. We’re trying to take as much experience from him, and knowledge from him, as possible. He was just saying how Dubai is more about teams using it to feel each other out. Just to see what they’re like and test things out.

“We have high standards and we set high expectations of ourselves. It’s hard to look past our group. If I said to you ‘oh, we want to make a quarter-final’, that’s kind of saying ‘oh, why don’t you want to make a final?’ It’s cliched, but we’re not really looking too far past USA next Thursday evening.”

Dardis was speaking at a media day in the IRFU’s high performance centre at the Sport Ireland Campus in Abbotstown. Previously based on Lansdowne Road, Dardis and his team-mates moved to their new home at the end of June.

With three outdoor pitches, a three-quarter length indoor pitch, medical rooms and state-of-the-art strength and conditioning facilities on site, Dardis and his team-mates have everything they need to compete with the very best on the World Series stage.

“You don’t really get used to it. We have our own jacuzzi and plunge pool right next to our dressing room! They’ve really given us every opportunity and support to do well. They’re quite ambitious the IRFU and they’ve great plans,” Dardis said of their training base.

“This was a great addition to Irish rugby and all the underage squads have had time here as well. They’ve gone into the gym and onto the pitch. The pitches are great outside as well. It’s a real energising environment.”

Though Dardis has left the 15s game on the back burner for the time being, his brother Sam is currently making waves in the All-Ireland League with Terenure College. Having spent two years in the Ireland U20s system himself, Billy feels the younger Dardis sibling is more than capable of stepping up to the international grade.

“Sam is having a good year to be fair to him. He’s only 19, he’s still eligible for U20s. He’s kind of fallen out of favour for a few years. I really hope he can get back into that fold because he is on the radar. It’ll be up to Noel McNamara [Ireland U20s head coach]. Hopefully he can pick him for a few trial games and give him a shot,” Dardis added.