Kildare to unleash their ‘hidden gem’

IT’S fair to say that Saturday game between Kildare and Longford will carry with it a little more intrigue for Kildare supporters than the usual opening O’Byrne Cup game. 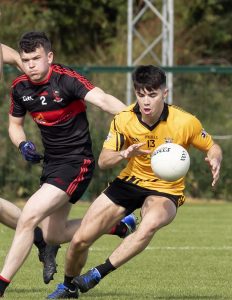 The last time that a manager with such a decorated CV as Jack O’Connor took charge of Kildare for the first time was in October 1990 when Mick O’Dwyer led the team out for a league game against Leitrim.

“Amazing too the effect the effect of O’Dwyer on the gate! 5,000, including 1,500 from the west, saw a game which a year ago would not have enticed 500,” wrote Paul Dohaghy in the Nationalist at the time.

Whether the same crowd shows up on Saturday remains to be seen but hopefully those that do will have a little more to cheer than back then. A 0-16 to 1-10 defeat on home turf to Leitrim was hardly the most auspicious of starts for the man who would go on to be Kildare’s most successful modern day manager!

There is similar interest to see what sort of tune Jack O’Connor can get out of this group of Kildare players as there was with Micko back then. Certainly, nobody can accuse O’Connor of being lazy or predictable in the way that he has assembled a squad for the O’Byrne Cup, with more than one eye on being ready to start well in the league. Trial games have taken place and the net has been cast far and wide. It has left us with a matchday squad 30 for the first game with a number of familiar faces returning as well as a talented bunch of youngsters hoping to catch the eye.

Daniel Flynn is undoubtedly the highest profile returnee. His decision last year to take a year away from the panel was a hammer blow to Kildare’s hopes for 2019 and similarly his return this season is a huge boost to everybody involved – the management, the panel and the supporters. Probably the most important job for a manager, before anything else, is getting the strongest possible panel available to him. Although the Ben McCormack and Mark Dempsey are unavailable due to other commitments the return of 26 year old Flynn, as well as the likes of Johnny Byrne, Shea Ryan, Liam Healy and Niall Kelly suggests O’Connor is very much on the right road.

While O’Connor and Flynn will hog the headlines, it could be a player pulling on a senior Kildare jersey in a competitive, semi-competitive at least, for the first time who could well be the most interesting of all those featuring on Saturday.

Jack Robinson is probably not that well known outside of the county, or even inside it to many, but to those who have watched this young player develop through the age grades with his club and county this is a day that they always thought would arrive.

The Clogherinkoe clubman is one of those players who always seemed destined for the top. Somebody recently told me, ‘Even when he was 11, whenever we were playing against him Jack was always the one we knew we had to stop’.

Robinson won a Leinster minor title with Kildare in 2016 but made the ill-fated decision last year to go travelling rather than staying and playing with a Kildare U20 team that went on to win an All-Ireland.

It was a decision that prevented him from showcasing his talents to a national audience and means that he is something of a hidden gem for Kildare this season.

This is not meant to heap pressure on his young shoulders, and somebody like Jimmy Hyland could tell him all about how difficult it is make the transition from underage to senior intercounty football, but Robinson is a huge prospect.

He played in the Sigerson Cup for NUI Galway last year but will feature for Maynooth University in this season’s competition. In the summer, he gave a glimpse of what he can do in a Kildare jersey at Croke Park when he scored seven points from play for the Juniors in the Leinster Final defeat to Meath. Then he helped Clogherinkoe into the Intermediate Championship semi-finals where they were beaten by a single point by eventual winners Monasterevan.

The prospect of seeing this exciting young prospect in a full forward line alongside Daniel and Neil Flynn is a mouthwatering one and should get Kildare fans dreaming of what might be to come when the serious games roll around.

Daniel’s Back For Royal Clash