JACK O’Connor has continued the theme of experimentation with his second Kildare team of the 2020 O’Byrne Cup. 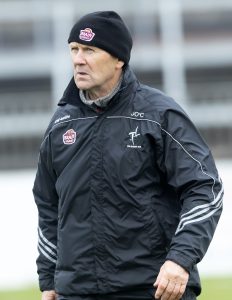 A number of new faces will get their chance to impress when Kildare travel to Aughrim to take on Davy Burke’s Wicklow on Saturday at 2pm.

Naas duo Conor McCarthy and Darragh Kirwan are named for their first Kildare starts, as is Clane’s Chris Byrne. There are some significant positional changes too with Celbridge’s Kevin Flynn named in a more advanced wing forward role compared to his usual wing back position, while Johnny Byrne is named in midfield, a position that he has often played in for his club Allenwood but a change to the usual wing back role for his county.

Daniel Flynn missed last week’s defeat to Longford due to a slight hamstring injury but he is again named at number 14 and could make his return to the Kildare team.

Like Kildare, Wicklow lost last weekend, against Carlow, and are looking for their first win under their new manager.

Kildare team to play against Wicklow: