‘WE DARED TO BE GREAT’ – HOGAN

DENNIS Hogan came up short in his attempts to win a world title when he was stopped for the first time in his professional career by the powerful, unbeaten American Jermall Charlo. 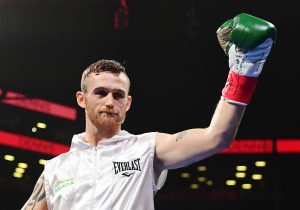 Dennis Hogan is introduced to the crowd prior to his fight with Jermall Charlo for the WBC World Middleweight Championship at Barclays Center in the Brooklyn borough of New York City
Photo: Emilee Chinn/Getty Images)

After a controversial defeat to Jaime Munguia in his previous world title fight, Hogan moved up in weight to take on middleweight Charlo and the difference in size and power was obvious through the fight.

Hogan was put on the canvas for the first time in his professional career with a bone shuddering uppercut early in the fourth round but then showed the heart of a champion to make it through to the bell.

It was a punch that would have ended the fight for lesser boxers but the determined Hogan made it through the next two rounds unscathed. He was having great difficulty in getting past Charlo’s accurate jab and on the occasions that Hogan did get on the inside he lacked the power to really put Charlo on the backfoot.

The fight was ended in the seventh round by another huge shot by Charlo and he racked up his 22nd knockout in the 30th win of his undefeated professional career. 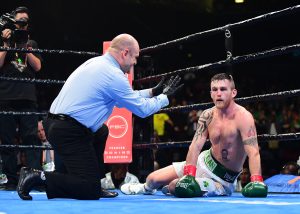 There was no recovering for Hogan after he was knocked to the canvas for a second time by Charlo
Photo: Emilee Chinn/Getty Images

“It started well. I could really feel that middleweight power when he landed that first shot, and after that, he knew that he had an advantage,” Hogan told FightHubTv after the bout.

“It didn’t faze me all that much and I tried to land more and that first knockdown warmed me into the fight. I then tried to get back into it and find ways to get ahead but in the seventh round, that shot, I didn’t even see it, it came out of nowhere.”

Now 34, Hogan has no intentions of quitting and remains determined to fulfil his dream of becoming a world champion, albeit back at 154lbs.

“It won’t be at middleweight for sure, it will be at light-middleweight. We gave it a shot but I was found wanting when it came to strength and power, especially against Charlo.

“Stephen Espinoza, the main guy at Showtime came up to me and said ‘big props’ because barely anybody will fight him at 160, so for me to come up from 154, it was good, and they said anytime I want to can come back and I will have a fight here anytime,” said Hogan. 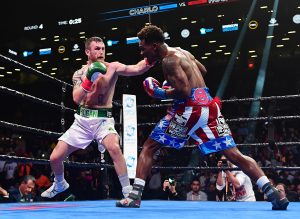 In another video posted on his social media accounts, Hogan said he ‘dared to be great’ and that he was looking forward to Christmas with his partner Brideen and daughter Aria.

“I’m a bit disappointed but I’m just happy to here safe and sound. Those shots, I’ve never felt anything like that before. I took them well, the fight was over in the seventh round, which was disappointing.

“I will live to fight another day and I will certainly be dropping down to 154 and pursuing my dream of being world champion there. I will have a bit of rest time with Brideen and Aria, I’m very much looking forward to Christmas in Australia and then I will be back pursuing the dream. It’s not over. Thanks to everyone for their support. We dared to be great but we came up short tonight, that’s boxing. We’ll be back,” said Hogan.

He didn’t leave New York with the belt he so craved but make no mistake about it, Hogan is a winner. Standing in Times Square for pre fight interviews, it was hard not to think about the road Hogan has travelled. That fight against Charlo really was the big time and although well beaten in the end, Hogan was by no means disgraced. With his parents and family and friends, from Ireland and Australia, watching on in the stands he put on a show that most people could only dream of. As long there is any chance of him winning a world title Hogan will keep chasing that dream but he should already be viewed as champion around Ireland, and particularly around his home county of Kildare.