FESTIVE fun was had and funds were raised for some very worthy causes thanks to Narraghmore Vintage Club’s Christmas Santa Run last month.

Held on Saturday 28 December there was a fantastic gathering of all sorts of vintage vehicles, with cars, jeeps, motorcycles and tractors (both old and modern) gleaming and ready for the road. Club PRO Eileen McEnroe explained that there were over 120 vehicles – “an excellent turnout” for their tenth year.

Alongside the machinery there was a bottle stall and attractions like a miniature thatched cottage with a (fake) cow waiting outside to be milked, as well as teas, coffees and soup in the local hall. One of their members – Tommy B – provided music and was MC while the crowd was gathering, while The Old Hardware community shop and tearoom was also open on the day and enjoyed plenty of footfall. 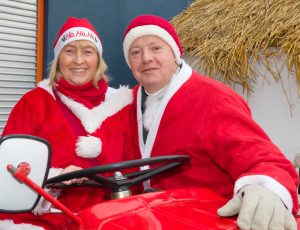 For the run itself the modern tractors took one route while their vintage counterparts went another way. The cars (and motorbikes) went on a run to Mullaghreelan Woods and returned via Castledermot and, when they got back to Mel’s pub, there was stew, teas and coffees and plenty of conversation, with music later that night.

Funds were raised mainly for St Brigid’s Hospice on the Curragh, alongside some other local charities, though the final amount has yet to be tallied.

Eileen noted that the club’s AGM will be held this Thursday night, adding that their monthly meetings – held on the first Thursday of every month in the band hall at 9pm – are a “lovely, sociable evening”. Membership, she said, is now due and “anyone that wants to join is more than welcome”.

They also have a breakfast run on the first Sunday of every month, something one of the club members decided to organise. They meet around 10 or 10.30am and head somewhere for a spin – previous destinations include the Arboretum in Carlow and Rathwood.

“It’s not just for Narraghmore Vintage members,” Eileen said. “There’s other people join in that are not members and they’re more than welcome.”