THE fantastic sum of €10,000 was recently handed over to Spina Bifida Hydrocephalus Ireland (SBHI) by social dance organisers Joe and Margaret Murphy.

The well-known and popular couple run a monthly social dance in Tougher’s at Newhall outside Naas, raising funds for spina bifida – something they’ve been doing for many years now. They also raise money for the Irish Cancer Society each year through Daffodil Day.

They handed over the €10,000, alongside €2,000 to a day centre in Athy attended by their daughter Joanne (who has spina bifida), at an event in Toughers on 19 December last, a fun and music-filled night which also featured their annual Christmas draw. 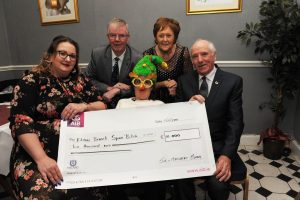 Funds were raised both through the Christmas draw – with great prizes and support provided every year by their sponsors – and from the monthly social dances, which run from 9.30pm to midnight. Entry for the latter is €10 while there’s also a chance to win a prize with a raffle held at every event.

Joe explained that Joanne lives for music and it certainly sounds like he enjoys it too. “We’d be out three or four nights a week dancing and she loves it. I think it’s keeping her going,” he said. “Every band in the country knows Joanne… She’d be out up at the stage and there… could be ten or twelve people dancing with her.”

If you’re interested in a night of great entertainment for a small price and in aid of a very worthy cause, the next social dance takes place on 30 January in Tougher’s.

“I just want to thank everyone that does support the monthly dance there,” said Joe, “and of course people who give spot prizes.”