A NEW initiative aims to support the girls soccer team at Athy Town AFC, which is coached by the well-known actor and former Ireland soccer player Charlie Hughes.

Anna Kadzik-Bartoszewska has lived in the county for years, first in Athy and then Kildare town. She’s a trained artist and architect and, until 19 April 2020, people can buy or commission her paintings, all in aid of the girls’ team, at a cost of €100 for a canvas measuring 80cm x 100cm. You can check out the campaign’s Facebook page (Painting for Athy Town FCA Girls Soccer- Equality in sports) for some samples of her wonderful work.

“Every single cent goes towards the girls,” she explained.

Anna encountered Charlie Hughes at the Gaiety School of Acting – Charlie works there on contract delivering different classes. Anna, who also works with UCD, explained that he had told her about their struggles in terms of funding and she decided to lend a hand. She has also signed up to do the Connemara Marathon on 19 April and will run the last kilometre in heels to honour the determination of those girls. Every bit of support helps, no matter how big or small, and people can always chip in with a few euro in support of this run – keep an eye on their Facebook page.

Anna told the  Kildare Nationalist that it’s not just about raising funds for the Athy team, but also raising awareness of how important equality in sport is and “how to really support and stand behind girls and women in sports”. 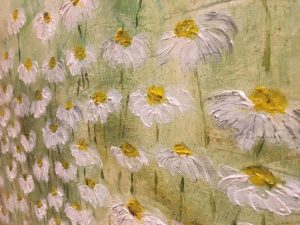 Charlie explained that he was telling Anna about the soccer team and how expensive it can be. He added that Athy Town AFC do everything they can for them, highlighting items like gear and jerseys, but noted that insurance is an issue for every club, and that it’s expensive for parents.

“I hate asking parents for another €80 for membership for a year, and most of that goes on insurance,” he said.

He also highlighted the potential impact of being able to take the girls to see the women’s international team playing, which he said “sets goals for them” and shows them that if they focus and commit, they could play for Ireland. “Why not?” he remarked.

Anna, he said, was shocked and surprised, “because she didn’t realise how much these things cost”, when he explained that they couldn’t bring the girls to soccer matches because he couldn’t be asking parents to dip into their pockets again.

“I’m overwhelmed, actually, as are the girls,” he explained of Anna’s decision to help. “They can’t believe that somebody they don’t even know has decided to give time and give their talents to making money so that they can go and have a good season and not be worrying their parents about money.”

Charlie explained that three seasons ago, he and former player Jimmy O’Donnell spoke with Athy Town AFC who he said were hugely supportive of starting a girls soccer team. His motivation was that “I have a girl myself that plays sport” who was looking for something after the gaelic season, and they initially joined the Carlow Kilkenny league and enjoyed a great season. It looks like they’ll be getting involved in a new Kildare league after Christmas and will be pushing for an U17 or U18 team.

Players come from the town and areas like Castledermot, Ballitore, Ballylynan and Kilberry and, as Charlie said, “the biggest thing that we try to encourage is a sense of fun”. They train on the all-weather pitch at Athy Community College every Wednesday night at 7pm and every single player gets game time every game. “This is about accessibility and about participation,” he noted.

Charlie, who praised the support of the parents, added that all girls are welcome to come down to a training session.

Social houses to be finished next year