THE Kilcullen Community First Responders group moved closer to going live this month when it was presented with a portable defibrillator and other first response equipment by Kilcullen based company Provincial Security.
The group was established in November, and with the donation of the equipment, is now hoping to be active from late January.
“We have already 12 people trained, and 12 more scheduled,” says Nichola Kennedy of the group’s committee. “Getting this equipment has helped to bring forward our going live, as our fundraising time for the first defibrillator was shortened.” 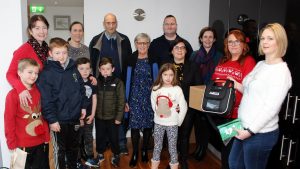 Laura Kavanagh and Amy Carry of Provincial Security (on right), with the company’s EMT instructor Wes O’Sullivan, presenting Nichola Kennedy and Karen Cradock and other members of the Kilcullen First Responders Group with life-saving equipment

Other equipment donated by Provincial included a vest to simulate how to use the Heimlich manoeuvre to save somebody who is choking. This procedure has also been practised by the group in their training.
“When we saw they were fundraising for equipment, we thought it would be a useful thing to donate it,” says Wes O’Sullivan, Emergency Response Team Instructor with Provincial Security. “We were very glad to do it, as a way of giving something to the very active community here.”
In addition to providing security and security training to its corporate clients, Provincial also trains company staffs in first responder techniques, including the use of defibrillators. “In one of our large clients, we have 196 people trained, and recently they had a cardiac incident in the company which had a good outcome because of first responder training.”
Provincial Security was established 50 years ago by a former Army officer, Captain Karl Dunleavy. The company moved its headquarters to Kilcullen a decade ago.