IN what could be an early contender for the Irish underdog sporting story of 2020, 47-year-old Michael Meaney will pit himself against some of the biggest names in the darting world in Wigan this week as he bids to earn a PDC (Professional Darts Corporation) Tour Card at their Qualifying School. 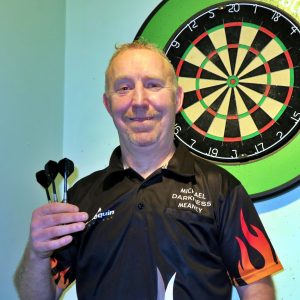 The top 64 players in the world are assured of their Tour Cards for the coming 2020 season but after that, all other players have to qualify through this school to earn their Tour Card so well known names likes John Part, Paul Nicholson, Kevin Painter, Jamie Caven and World Championship sensation Fallon Sherrock will all be in attendance.

In amongst them will be Michael ‘The Darkness’ Meaney.

The Kilcullen man has earned a fearsome reputation while throwing for the Spout Pub in the Kildare leagues over the last few years but admits that this competition will be like nothing he has played in before.

“I’m throwing for 20 years, just around the pubs and at home. I have been getting plenty of slagging from lads telling me that I should be trying to do this and trying to do that so I just thought it’s time to get the head down and give it a go.

“I’m throwing well. We won Division 1 last year and were beaten in the Championship final so I just decided to chance my arm,” said Meaney.

Many people sit at home watching their favourite sport thinking they could do better but Meaney now has the chance to go up against some of those that he has only ever previously seen on television.

“I used to watch the BDO at home, and it never looked great because their finals come just after the PDC has been on Sky, and I’d always say ‘next year I’ll be there’. I have to thank all the lads in the Spout as well because we’d be in there playing and they’d be slagging me over it as well. Look, we’ll see what happens. I’ve a young lad there, Mark, and he’s going to school and I was telling him that he might see me on the television and he was saying ‘yeah, we’ll see what happens’,” he laughed.

As he explains, the competition lasts four days with separate knockout competitions played on each day.

“You start on Thursday and if you keep winning you keep playing, if you lose you are gone until the next day. You get points for every match you win and each day it goes right down to quarter-finals, semi-finals and finals. Anybody who reaches a semi-final or final on any of the days is guaranteed a Tour Card. On the last day on Sunday, there are 12 Tour Cards available and there are four more cards available for the players who have built up the most points over the four days,” said Meaney.

The matches are won by the player who first wins five legs and even up against some star names, nerves won’t be a problem.

“I’ve nothing to lose, I’m just chancing my arm. There’s no pressure on me at all going over there. They don’t know who I am, I know who they are and if I play somebody big I’d love that. If I get a good draw, I know I can go far but it all depends. You could get a good draw, you could get a bad draw, that part of it is down to a bit of luck. I can’t wait for it,” he added.

Meaney is recognised as one of the best dartists in the county and he is relishing the chance to see where that could place him in such exalted company.

“I think that I am a good thrower around Kildare but this is stepping up against the creme de la creme and it will show how good I am. People like Bobby George, Martin Adams are supposed to be there, Fallon Sherrock, Lisa Ashton, some of the best players around. If you happened to get a Tour Card it would be massive, it would change your life completely. For some of those events you could be getting €6-7,000 just for entering and if you win a few matches it just keeps on building up,” he said.

Meaney will be accompanied for the week by friend and throwing partner Tadhg Shanahan and although at a lower level of competition, the pair have already tasted victory on English soil.

“Tadhg is coming with me. He is my mentor, if he can’t look after me nobody can. We played together in a competition last year in Blackpool and we won it. That was nothing major, nothing like this but there were some good players in it and we won it out,” he said.

Although a relatively small town, Kilcullen loves their sportstars and Meaney would love to follow in the footsteps of the likes of boxer Dennis Hogan and pitch and putt world champion Chrissy Byrne and give the town something to cheer about. He is indebted to those who have already shown him support.

“I’ve got some great sponsorship and great support from friends and family. John Berney from Berneys Pharmacy in Kilcullen has been a great support, RPM Carpentry have been great too and I have to mention Chas Lambe too who is a good friend of mine. There’s been a great buzz around the town about it and on Facebook.

“I started playing for the Spout in the Kildare leagues about two years ago and we started to win a few things, I was throwing well. The boys always said to me to give something like this a go and I just thought this time that I would give it a chance. It’s only one chance so I’ll give it a go now, I’m 47 so I may as well,” he said.