JACK O’Connor and David Herity have named their respective panels for the upcoming Allianz National League which begin with a double header in St Conleths Park on 26 January. 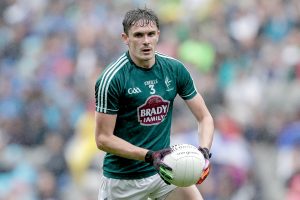 David Hyland has been named as the captain of the Kildare footballers for the 2020 season
Photo:©INPHO/Laszlo Geczo

Kerryman O’Connor has named a 37 man panel for the upcoming league. That’s two more than originally planned due to Fergal Conway and Aaron Masterson carrying injuries that are likely to see them sidelined for majority of the league.

2019 Kildare Player of the Year Conway recently had an operation on a knee problem and is expected to be out for 6-8 weeks while it is suspected that Masterson has a broken bone in his foot. Kevin Feely is also carrying an injury at the moment and is in a race against time to be fit for the first game against Fermanagh.

With those injuries taken into consideration it is interesting to note that Round Towers goalkeeper James Robinson has been called into the squad while Aaron O’Neill is grouped among the outfielders on the panel. O’Neill has been the back up goalkeeper to Mark Donnellan for the last two seasons and was between the posts for the 2018 U20 All-Ireland winning team but has played a lot of his football outfield for Carbury and often been one of their best players in that position.

Robinson is one of eight players on the panel who have not previously played league football along with Chris Byrne, Daragh Ryan, Darragh Malone, Eoghan Bateman, Jack Robinson, John Treacy and Liam Power. Padraig Fogarty returns to the panel after playing his last game for the county, apart from the O’Byrne Cup, in Jason Ryan’s last game in 2015.

Athy’s David Hyland takes over the captaincy for the year with Mick O’Grady the vice-captain.

For the hurlers, manager David Herity wanted to pick a captain from the senior county champions so from the large contingent of Naas players on his panel has plumped for 2018 Christy Ring Cup winning skipper Brian Byrne.

The hurlers begin their season against London in St Conleths Park against London on 26 January, the curtain raiser to the footballers’ first game against Fermanagh. We’ll have much more from both managers in Tuesday’s edition of the paper as part of our preview of the new season.