SIZING John’s injury jinx has struck again after the Jessica Harrington yard confirmed in a tweet today that the horse will miss the rest of the season after suffering a new injury. 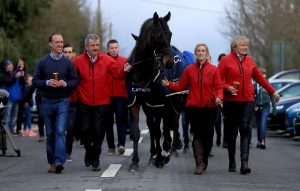 Sizing John received a hero’s welcome on his return to Moone after his 2017 Gold Cup success
Photo: ©INPHO/Donall Farmer

The horse, trained in the Commonstown Stables in Moone, famously won the Irish Gold Cup, Cheltenham Gold Cup and Punchestown Gold Cup in a matter of months in 2017 and looked set to continue that form when he won the John Durkan at Punchestown early the following season

However, following defeat at the 2017 Christmas Festival it was two years before he made his return to the track.

He made his long awaited return to racing duty on New Year’s Eve just passed and even though a fall at the third last meant he didn’t finish his comeback race, he came out unscathed and was targeting another crack at the Irish Gold Cup in the Dublin Racing Festival this weekend, and also the Cheltenham Gold Cup.

But those plans are now in tatters after it was confirmed that the horse “wasn’t 100% after his fast work at the Curragh yesterday”. 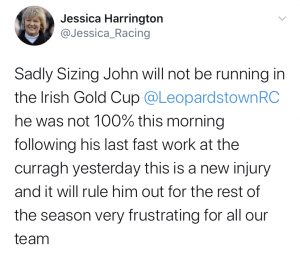