Wednesday, January 29, 2020
Unbeaten Irish champion Eric Donovan will have to keep his wits about him this weekend after being handed a tricky late change of opponent.

The Kildare featherweight southpaw headlines the big ‘Celtic Clash 10’ bill at The Devenish venue in Belfast this Saturday night [1 February] and was due to face Spanish champion Cristian Montilla. However, his plans were thrown into disarray with news that Montilla withdrew from the bout. 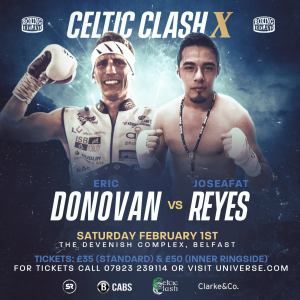 Thankfully a testing replacement has been sourced at extreme late notice and Donovan will now face tough Mexican Joseafat Reyes instead in the eight-round top of the bill clash. The Irish featherweight champion has been in camp with coach Kenny Egan since before Christmas preparing for Canary Islander Montilla, an orthodox fighter, but now must quickly change plans for his duel with southpaw slugger Reyes – his first ever Mexican opponent.

Reyes has caused shocks in the past, most notably derailing unbeaten prospect Israel Robles and defeating England’s Brad Watson. Never knocked out, the 26-year-old has only lost to the very best – including world champions Paul Butler and Ryan Burnett as well as European champions Thomas Masson and Marc Vidal.

It will certainly be a tough outing for 34-year-old Donovan who is kicking off a make-or-break year for his career. The former European and EU medallist and champion amateur has set himself an ultimatum, stating that he will need to claim continental honours or enter the Top 15 of the world rankings inside the next 12 months or else he will draw his storied career to a close.

First up on this journey, Josefat Reyes