IF you are a fan of Kildare boxers then you will be in Belfast on Saturday night, the only question is will you be in the Ulster Hall to see Gary Cully box for his first professional title or will you be in the Devenish Complex to see Eric Donovan and Katelynn Phelan in action.

Cully’s fight for the BUI Irish Lightweight title is one that he has targeted since the moment he turned pro. The 6’2” Naas southpaw has been thoroughly impressive in his nine professional fights so far and he has an unblemished record with four wins by way of knock out. 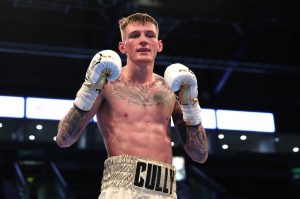 Still only 24, he has been desperate to step up in quality and fight for titles and this is his first chance to box for some jewellery to adorn his waist.

Although slightly favoured by most neutrals, Cully’s task is a tough one and he will have to be at best to leave Belfast as the Irish champion. His opponent is also unbeaten in the pro ranks and is fighting in his home town. Joe Fitzpatrick previously won a silver medal at the 2014 Commonwealth Games and is clearly no slouch.

However, this is the fight that Cully has been working towards and he has been very vocal about his confidence to win the fight on social media. That confidence has been backed up in the ring right throughout his career, though. We’ve tipped Cully for big things on these pages before and winning the Irish title on Saturday would only be another small step towards where he will eventually end up.

A man who is already Irish champion but with dreams of going further will be boxing across Belfast at a similar time and that is Eric Donovan.

Since beating Stephen McAfee to become the Irish champion last March the Athy fighter has been desperate for the chance to jump to European level and his fight on Saturday might just be a pathway towards that.

A late change of opponent means that Donovan will go in against the tough Mexican, Joseafat Reyes. The 26-year-old has been against some top class fighters and although beaten by world champions Paul Butler and Ryan Burnett, and European champions Thomas Masson and Marc Vidal, he took all the full distance. 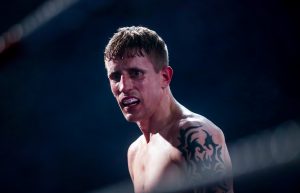 A late change of opponent will make things a little more awkward for Eric Donovan on Saturday night in Belfast
Photo:©INPHO/Oisin Keniry

Donovan, in a make or break year for his career, spent the Christmas period working with coach Kenny Egan preparing to box against orthodox fighter Cristian Montilla but at short notice now has to change his preparations and get ready to fight the southpaw Reyes.

On the same bill as Donovan, Ireland’s youngest female professional boxer will continue the early stages of her career. Teak tough Katelynn Phelan has been training hard in the build up to this fight and after winning her first two pro bouts the Kildare Town girl will be looking to make it three in a row. She goes up against Borislava Goranova, an experienced Polish boxers who has over 70 fights on her professional record.

“I’d like to get my record up and work my way up the ranks and show more of my skill that I have. I know there will be big things coming. I am only 19 so there is no rush. I know I am well able to win a world title and the sooner the better I get belts, but I know I have to listen to people around me and keep learning. I can’t believe how much support I have. I’d be lost without them,” said Phelan.