A notification was received from the SFAI last week which would appear to rule out certain players in Kildare from competing in this year’s Kennedy Cup. 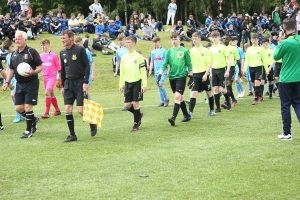 Alex Conlon leads out of the KDUL team before the 2018 Kennedy Cup final
Photo: Pat McNally

“Following a ballot of all Schoolboy Football Association of Ireland member leagues, conducted via their SFAI Council members, regarding the eligibility of players who have returned from National League clubs, a maximum of five such players will be allowed to play for each participating league at the 2020 Kennedy Cup,” it read.

This is the first time in the history of the Kennedy Cup that there has been any restriction put on players playing in this competition and or placing any restrictions on a League in their selection process and hugely impacts Kildare.

For the first time there was a National League at Under 13 level in 2019 and in the absence of any national competition for that group to play at at under 14, the squad were kept together and entered into the Under 15 Kildare League with the aim to play in the 2020 Kennedy Cup before competing in the Under 15 National League beginning in March 2021. This ruling would mean that only five of that 20 player squad would be elgible to play in this summer’s Kennedy Cup.

The KDUL have always taken the Kennedy Cup very seriously and reached the final in University Limerick in 2018.

Former Secretary of the KDUL Pat McNally blasted the decision as ‘disgraceful’.

“This is a dreadful decision. I never thought I would see the day that registered players within the league are prevented from playing in a National competition. It must be remembered that in last years competition a team from outside the jurisdiction were invited to play in order to keep the number at 32 teams,” he said.

Far from accepting this ruling, the KDUL intend on bringing this matter all the way to the FAI.

“This is something that the FAI will have to get involved in and we will certainly be bringing our case to them with the support of the parents of the players affected by this ruling,” said McNally.

”It is totally wrong that players who played in last year’s National League are being discriminated against and that children are being victimised. This appears to be a battle between the SFAI and the FAI over the Under 13 National League and the SFAI are using the players, who are young children, to wage war. It is wrong,” he added.

Kildare aren’t the only league affected and the other leagues who competed in the Under 13 National League last year – Mayo Schoolboys League, Kerry Schoolboys League and the Cavan Monaghan Schoolboys League – have been similarly impacted. It is understood that they are as unhappy with the ruling as Kildare are and will joining the KDUL in bringing this matter to the attention of the FAI.