BURKE RETURNS TO KILDARE LINE UP

BALYNA’S Erica Burke is set to start her first game for Kildare since 2017 when Daniel Moynihan’s team entertain Wicklow in St Conleths Park on Sunday. 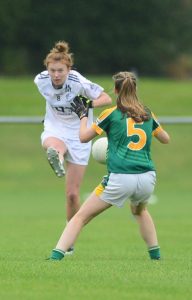 Erica Burke is set to make her return to the Kildare team on Sunday
Photo: Adrian Melia

Burke was an inspirational 21-year-old midfielder when Kildare won the All-Ireland Intermediate title in 2016 and then captained the team in the following season. She was unavailable for the last two seasons but has been training with the team since before Christmas.

Burke was named to start the first game of the season against Fermanagh but a late injury ruled her out. Now, she is set to start in a further boost to a team that has already welcomed back goalkeeper Mary Hulgraine as well as being able to call on the Defence Forces duo of Siobhan O’Sullivan and Grainne Kenneally.

This is Sligo native O’Sullivan’s second season with Kildare and she featured prominently in last week’s win over her native county. Kenneally actually played against Kildare for Waterford in the 2015 All-Ireland Final but after eight years of travelling from her new home in Kildare to play for her home county she has thrown her lot in with her adopted county. Another former team captain, Roisin Byrne, is again named among the substitutes as she edges closer to making her return after missing all of last year with a shoulder injury.

After two rounds Kildare find themselves joint top of the table alongside Roscommon and Down as the only teams to have won both their games so far. Wicklow are still searching for their first win of the season having drawn both their games. In their opening game they came from nine points behind in the second half to draw level with Laois but after falling behind again they still needed a last gasp injury time equaliser to take a share of the spoils. They drew again last week against Longford.

Last year Kildare and Wicklow played out an exciting game in Dunlavin with the Garden County side pinching the win late on after a strong second half from Kildare.

It’s a much changed Kildare team this season though and they will confident of their third win of the season, and second in a row in St Conleths Park. The game in Newbridge throws in at 2pm and for those that can’t make it, the game will streamed live on the LGFA Facebook page.