Students pop up with fine dining

A ‘POP UP’ restaurant in Kilcullen’s Cross and Passion College last Saturday night was a first in the country.

‘The Cross Bistro’ was the result of a new Transition Year module culminating in cooking for and serving 75 guests in a specialy constructed ‘rustic intimate’ setting that rivalled many commercial restaurants.

The students devised the menu — choice of starters, soup, choice of mains, choice of desserts, and coffee with petits fours — cooked the food, provided front of house staff, and designed the theme of the restaurant themselves.

The whole event was everything that the TV The Restaurant is, except that no celebrities were involved, and no grading came at the end.

“We guided, but they did it all themselves,” says Georga Dowling, who with her husband Conor Wafer operate the Food School cookery school based in Newbridge. After working with some students in recent years, Georga and Conor decided that a module for TY would be a very useful option. “There have been cookery modules in many schools, but nothing like this. To our knowledge, no school has done a module that culminates in a fine dining experience.” 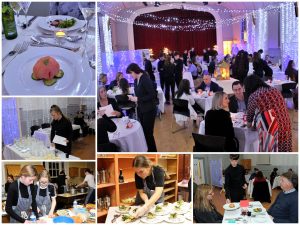 Vews from the Cross Bistro ambience, preparation, and service by TY students in the Food School Transition Year module. Everything was done by the students, including the Bistro design, and all the food, under the supervision of husband and wife team Georga Dowling and Conor Wafer of Food School

They designed the course and consulted with Glenda Groome, the TY Head in CPC, who fully backed the concept. When it was offered last November, the response surprised everyone. “We had 24 students working front of house with me, and 17 in the kitchen with Conor,” Georga says. “What they learned in the kitchen included knife skills, what food goes with what, how to cook and how to present food so it looks nice. What I found fantastic was how they were willing to learn new things.”

The front of house group decided on the name of the restaurant, designed a logo, did sketches of how they wanted the room to look. To help with building the restaurant ambience for ‘The Cross Bistro’, the group enlisted the help of a TY mini company, Well Lads, who have been building bespoke garden furniture in CPC and selling it. “They came to us looking for sponsorship. We said yes, but it’s two-way. So they built the dividers which we dressed with material to turn the assembly hall into an intimate space for diners.”

Over the course of the module, there were many examples of initiative. One was while front of house staff learning to carry three plates at a time. “They were practising in the Library, with plastic plates. Then one student said the plates were too light, so they put books on the plates to simulate the weight of the real ones.”

There were other things to learn, like the proper setting of tables. In the kitchen, new dishes were introduced which wouldn’t be the usual fare at home. But all were embraced, built on, and produced. Costings and menu pricing were another element which wouldn’t have been in the students’ previous experience. “They then did a marketing campaign within the school to see how well the evening would sell. We originally thought 50, then it went to 60, and we finally closed it at 75. It shows an incredible support from the parents.”

Looking back at the experience, Georga is highly pleased at how it turned out. “What really blew me away was their enthusiasm for the whole project. They wanted to learn, they wanted to learn everything. After our first presentation, a few decided that it wasn’t for them, but they were immediately replaced by others who hadn’t opted for the module in the first place and now realised what it could be.”

The students themselves all say they enjoyed it too. In some cases they joined because they had an idea that they  might go on to work in the hospitality industry. Others say they’ll find the new skills useful if they take on part-time jobs in cafes and restaurants while doing further studies.

“Some have also told me that they are now cooking dinners at home,” says Georga. “What has really been great is to see them go through the course and come out the other end with an appreciation of food.”

Most of the learning took place in the CPC’s Home Economics room, and the Food School brought in whatever extra equipment was needed. On Saturday last, everybody reported for prep duty at 11am, with the guests arriving at 6pm for a 7pm service.

“I think they will look back on the whole thing as a time of great camaraderie, and great achievement,” Georga says. One of the biggest things that I learned was to step back and let them do it. That was hard. I had a vision, and their vision turned out to be very different to mine. But it’s their restaurant, it’s their creation, it’s what they wanted.”

Even if there was no official grading, the whole evening deserved five stars from the full house. There might well be a demand for the return of ‘The Cross Bistro’.