TWO teams of from St Conleth’s Community College have been awarded grants totalling €1,500 from the Young Social Innovator (YSI) fund  for their work on inclusion and integration at the school at a Dragons’ Den-like presentation in Dublin.

Hoping to encourage people on the autistic spectrum to get involved in sports, one team from the school received its €750 towards making a sensory integration app to support sports clubs to become more disability-friendly.
The other group from the Newbridge academy looked to build a shared space for cultural inclusion in their school to promote tolerance and celebrate diversity, and will they now work with a local architect to design and develop this communal space with their award. 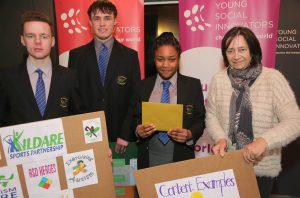 Team Up 2 Us from St Conleths Community College, Newbridge, pitch their project, which focuses on cultural diversity and inclusion, to the panel to the panel of Den dragons. The team will use the funding they received to work with a local architect to design and develop the communal space in their school.

They weren’t the only successful school in the county, with students from Scoil Dara, Kilcock also winning €400 for creating a short film about substance abuse.
The teams have been working on projects through the YSI initiative since September, and “impressed the panel of Dragons with their creative ideas to effect positive change in their communities and wider society”, according to Bronagh O’Hagan at YSI.
A total of just 11 projects were invited to pitch at the YSI Den in Dublin for a share of this year’s €10,000 social innovation fund, with a further seven projects pitched at a second YSI Den event in Cork from a total of over 7,000 students throughout Ireland who are currently involved in similar projects with YSI in 2020.

YSI is a non-profit, supported by its lead public partner, the Department of Rural and Community Development. Other sponsor partners include the Health Service Executive, the Departments of Children and Youth Affairs, Education and Skills and Employment Affairs and Social Protection, the Dormant Accounts Fund, The Tomar Trust, Irish Aid’s WorldWise Global Schools and the Crisis Pregnancy Programme. Further support is received from Google, AbbVie Ltd and the Smurfit Foundation.